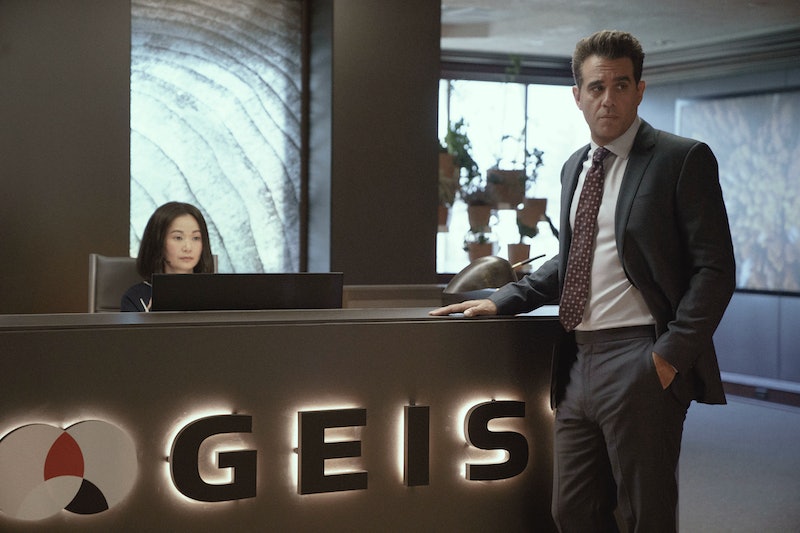 There are more than a few unnerving things about Amazon's new thriller, Homecoming. The story centers around Heidi Bergman (Julia Roberts), a therapist working for a mysterious program for returning veterans called the Homecoming Transitional Support Center. It's being run by The Geist Group, a highly suspicious company filled with self-serving executives out to save their own skins — which should be enough to make you really hope The Geist Group isn't a real company.

Luckily for everyone, the nefarious corporation is purely fictional and, much like the rest of the show, has been adapted for television from the original Gimlet Media podcast of the same name. Geist comes from the creative minds of Eli Horowitz and Micah Bloomberg, the visionaries behind the podcast, which marked Gimlet's first fictional, scripted endeavor. On the podcast, all the listener ever experiences from the sinister company are phone calls between top Geist executives Audrey Temple (played in the podcast by Amy Sedaris), Colin Belfast (David Schwimmer), and Randolph Geist (Spike Jonze). In the Amazon Prime adaptation, the Geist Group comes to life, complete with a dizzying office of five floors, plant-based office names, and one incredibly uncomfortable armchair. It manages to give the viewer a sense of awe and unease all at once.

Just as in the podcast, Homecoming makes it clear from the beginning that the Geist Group, and everyone who works for them, aren't to be trusted. In particular, Colin (Bobby Cannavale in the show), who serves as the liaison between Homecoming and the Geist Group, seems ready and willing to do everything in his power to make sure the program succeeds. As Heidi begins to uncover the truth about the work being done at Homecoming, she'll have to outmaneuver him and the rest of the Geist group to try to save both herself and her patient Walter Cruz (Stephan James).

But the Geist group won't only be facing internal threats. Thomas Carrasco, played by Shea Whigham, is billed as a department of defense bureaucrat investigating a complaint at Homecoming that Heidi may have played a part in. From the looks of the trailer, he seems determined to get to the bottom of it, but the executives at the Geist Group are equally set on avoiding his inquiries.

It's a conflict that will play out for the entire season. And although Geist Group is (thankfully) not a real company, that's not to say there aren't organizations out there who are sponsoring programs and sanctioning activities that the public might be outraged by. Perhaps no company is doing anything as heinous as the Geist Group, but there are surely quite a few less-than righteous executives out there committing injustices that served as a model for the Homecoming creatives. (Looking at you, Succession).

Will the Geist Group prevail? Or will Heidi and Walter get the better of them? Guess you'll just have to immerse yourself in the twisted world that is Homecoming to find out. Season 1 hits Amazon Nov. 2.