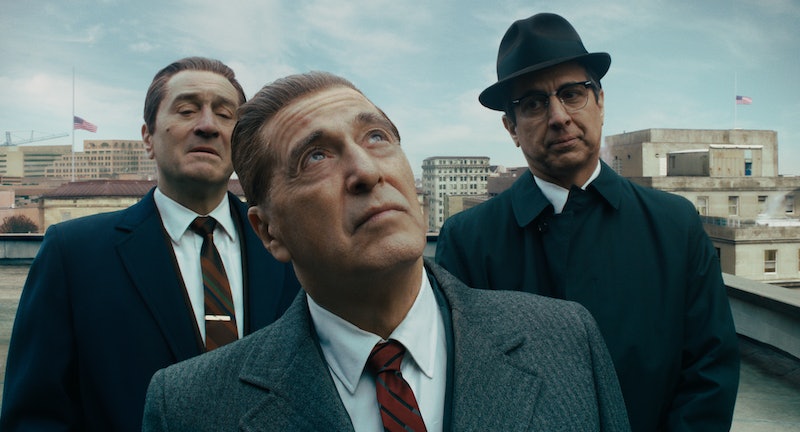 In The Irishman, Netflix has arguably its most prestige film ever, as evidenced by its Golden Globe nomination for Best Picture - Drama. Directed by Martin Scorsese and starring Robert de Niro, Al Pacino, and Joe Pesci, the film is like the history of American mafia movies all rolled into one epic three-hour-plus movie. But is The Irishman a true story? After all, prestigious mob movies have run the gamut from pure fiction to true tales. The Godfather? That's based on a novel. Goodfellas? The real life account of Henry Hill. The Departed? That's actually a remake of a Hong Kong film called Infernal Affairs. So where does The Irishman land on the spectrum?

As it turns out, The Irishman isn't so easy to categorize when it comes to truth and fiction. Ostensibly, the book is based on a true story. It chronicles the life of Frank "The Irishman" Sheeran, portrayed by de Niro in the film. As for what's definitely true in the movie, Sheeran really was a prominent official in the Teamsters Union during the time period depicted in the film. He really was a World War II veteran. He really did go to prison for racketeering. And he really was an associate of both mafia boss Russell Bufalino (Pesci) and labor leader Jimmy Hoffa (Pacino). But just how involved Sheeran was with those two men is where the truth gets a bit murkier.

The Irishman is based on the nonfiction book I Heard You Paint Houses by author Charles Brandt, which was first published in 2004. The book details Brandt's interviews with Sheeran, which the alleged mob hitman gave near the end of his life in 2003. Among other things, the book reveals Sheeran's claims that he murdered gangster Joe Gallo at Manhattan's Umberto Clam House in 1972, and even more shockingly, Sheeran claims that he was behind the notorious 1975 disappearance of Hoffa. Specifically, Sheeran claimed that he shot and killed Hoffa in Detroit, on orders from the mob. Officially, both Gallo's murder and Hoffa's disappearance remain unsolved.

Sheeran's claims to Brandt are pretty extraordinary, which is why some have claimed that "The Irishman" made up the most fantastic bits of his life story. One prominent critic is Slate reporter Bill Tonelli, who claimed that Sheeran was nothing but a minor player in the local crime scene of Philadelphia. Tonelli alleged that Sheeran made up a persona for himself that happened to put him at the center of some of organized crime's biggest dealings in the 1970s, joking that The Irishman makes Sheeran into "the Forrest Gump of organized crime." Another prominent critic who disputes Sheeran's claims is Jack Goldsmith of The New York Review of Books. Goldsmith happens to be the stepson of Hoffa associate Chuckie O'Brien, whom Sheeran claimed drove Hoffa to his eventual murder house. Goldsmith opined that Sheeran is simply one of a long list of people who falsely claimed to have murdered Hoffa in an attempt to gain some notoriety for themselves.

Whether Frank Sheeran was telling the truth about his life or not, The Irishman is still a fascinating look at organized crime in the latter half of the 20th century — which ought to make it tough to beat at the Golden Globes.