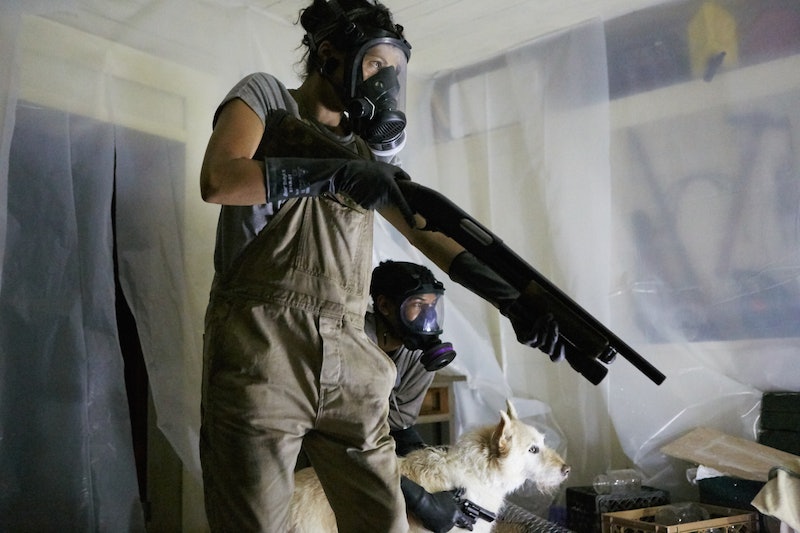 In It Comes At Night, Paul has a system: no one goes in or out of the house alone, no one goes out at night, and, when encountering foreign or unidentified animals and people, always wear a gas mask. In the new movie, the world has been ravaged by an unnamed and fatal disease. Fans will be pleased to hear that, though it is reminiscent of the black plague that killed millions in the 14th century, the It Comes At Night disease isn't real... yet.

The illness in It Comes At Night is present from the very first shot of the film. The movie opens with a woman, Sarah, and her husband, Paul, saying goodbye to her father Bud through their gas masks. He's sick. His skin is covered in black boils, his breathing is labored, and his eyes are black. He won't last long, and it's clear he's not all there. After Sarah says goodbye, Paul and their teenage son Travis take him outside, where Paul shoots him in the head and burns his body. Whatever this illness is, one thing's for sure: it's not pretty. It's later explained in the film that (spoiler alert) the sickness is highly contagious, with symptoms showing in those infected within the two days of exposure. The quick speed of the illness definitively rules out the plague, and the illness remains unidentified throughout the film.

It Comes At Night is a unique horror film in that the cause of the death that plagues its characters is only manifested in the illness, which audiences are led to believe has decimated the country, resulting in a survival of the fittest dystopia. One assumes there must be infected creatures or people walking around, spreading the disease, but those people are never shown. And that's because the illness, as scary as it is to viewers, isn't the real source of the horror in the film. What makes the film truly scary is how the illness affects the characters, and how it leads them to treat each other. Director Trey Edward Shults told RogerEbert.com that he wanted the movie to allow audiences to "see how fear affects them, and see how fear tears them apart."

Leaving the illness in It Comes At Night unnamed in turn makes the situation more scary for the audience, who doesn't have real deaths to make them afraid of a fictional disease. As an audience member, the fear of not knowing opens up infinite possibilities and the lack of a villain makes it difficult for fans to process their concern or anger, thus making the movie more scary. It means we can't write off the disease as entirely fake or real. It means that like the characters in the film, we too can turn on each other.