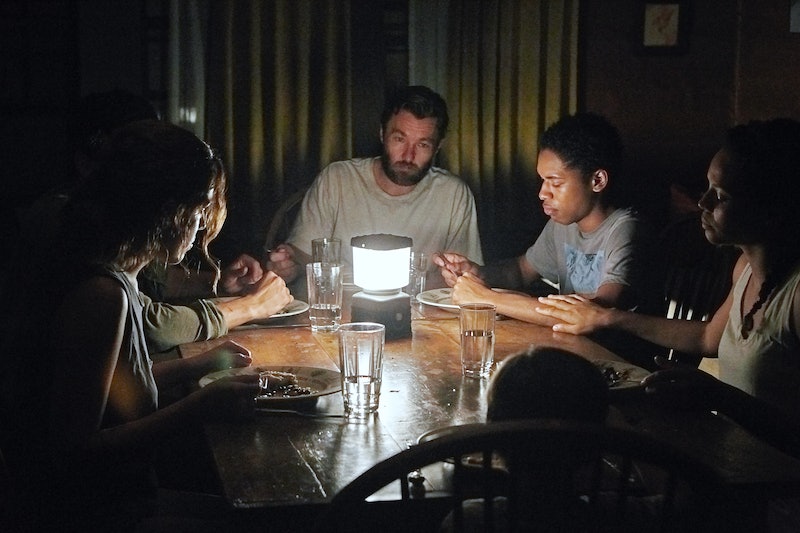 There's something lurking outside — something deadly. In It Comes At Night, an unnamed threat has caused an epidemic and a massive breakdown in society, leaving one family to take refuge in a secluded home in the woods. So if you're wondering how scary is It Comes At Night, you're asking the wrong question. What you should be asking is, how afraid are you of the unknown? (Also, are you a germaphobe? Because if you are, then I can guarantee you that the film will be one of the scariest thrillers you've ever seen.)

For those who fear what they cannot see or understand, It Comes At Night will be the closest thing to a waking nightmare to ever come to the big screen. It isn't your typical horror movie, but it has all the makings of one. Full of dark, long hallways and things that go bump in the night, the film has just the right amount of jump scares and tense moments to satisfy any horror loving audience. However, one thing the film does not have is a villain. Trailers for It Comes At Night hint to a zombie movie, but the mysterious disease in the film that causes one to cough up blood and contract boils, is never directly related to any kind of zombie threat. The only thing we know about this illness is that it is highly contagious, but other than that it could be anything from a zombie apocalypse to a new plague.

Even the main characters in the film don't know what's going on in the outside world. They fear strangers, and they feel enough of a threat only to go out in the daytime and only in groups of two or more. But the nature of the threat and the effect the illness has had on the world are complete mysteries to them. Is the government still running? Are there armies fighting a distant zombie war? Or have a majority of people become casualties of the apocalypse? Nobody knows, and that's what makes it frightening. Yes, the dark lighting and images of the sick are terrifying, but what makes It Comes At Night so chilling is how much of it is unknown. There's a comfort that comes with knowing the source of danger, even if the threat is still there. The movie doesn't give the audience any such comfort. The audience is kept in the dark — metaphorically and literally — and contrary to the saying, what you don't know can hurt you.

In the age of CGI monsters and extreme gore, It Comes At Night incites nightmares by doing less, not more, and I have to admit, it's pretty effective.