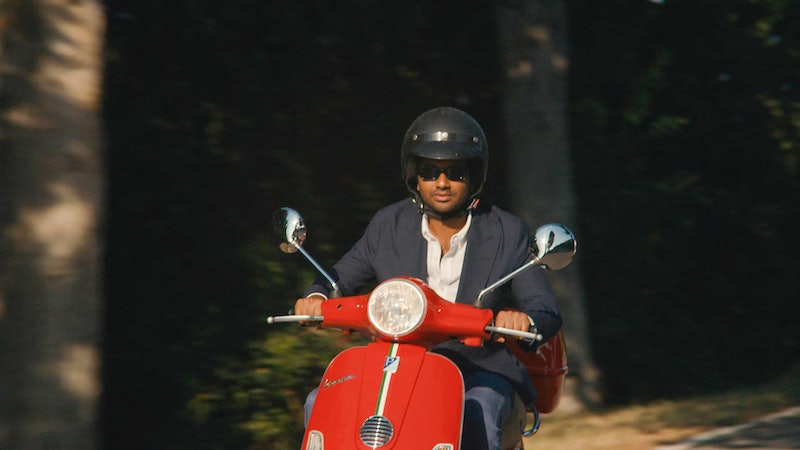 After spending most of the first season of Master Of None in New York City, Aziz Ansari's character Dev is taking a little trip across the Atlantic in Season 2. Spoilers ahead. After breaking up with his girlfriend Rachel in the Season 1 finale, Dev decides to head to Modena, Italy to learn how to make pasta. As we learn in Master Of None's Season 2 premiere, "The Thief," Dev is living his best life in Modena. But, knowing that TV doesn't always represent reality, it's worth asking if the Italian city on Master Of None is real.

Let's just say you may want to go to there on your next European vacation because, yes, it is a real city — and a very beautiful one at that. In an interview with Vogue back in April, creator, writer and star Ansari said he picked Modena for the setting of Master Of None Season 2 because, a few years ago he took the same pilgrimage his character did and ended up in the Italian city that is 90 miles north of Florence. With just a few weeks of Italian lessons under his belt, he really moved to Modena to learn how to make pasta. “No one in Modena knew who I was. They’re just like, Oh, this guy,” he told the magazine.

In a recent interview with The Tonight Show Starring Jimmy Fallon, Ansari said for months he just hung out in the city making pasta in a little shop and working at the restaurant Hosteria Giusti, which is featured on the show's premiere. No one knew who he was until one day someone realized he had four million Instagram followers. He decided to go back and film a couple of episodes there, including the Season 2 premiere, "The Thief." It was shot in black and white, in honor of the 1948 Italian drama The Bicycle Thief, because he loved it. It also fit into the show's narrative, which Ansari has admitted mirrors his own life very closely.

It probably didn't hurt that Modena was also an untapped television paradise. “Nobody had ever filmed anything like that there,” Ansari told Vogue. “Though it looks beautiful on-camera.” Modena, which is the hometown of both tenor Luciano Pavarotti and the automobile company founder Enzo Ferrari, is known for its cuisine. It's currently the home of the number one restaurant in the world Osteria Francescana, which also gets a cameo appearance on Master Of None. On top of that, Dev finds himself nibbling through the famous Modena supermarket Mercato Albinelli, which puts your local grocery to shame.

Basically, when you're all done watching Season 2 of Master Of None you're going to want to book a trip to Modena. Just tell them Aziz Ansari sent you.

More like this
The 'Kenan & Kel' Reunion On 'SNL' Took A Dramatic Turn, Thanks To Keke Palmer
By Brad Witter
Owen Warner's Net Worth Might Surprise 'I'm A Celeb' Fans
By Sam Ramsden
Larsa Pippen Is Reportedly Dating The Son Of A Legendary NBA Player
By Jake Viswanath
Are Sparkle & Steven Together After 'Back In The Groove'?
By Grace Wehniainen
Get Even More From Bustle — Sign Up For The Newsletter