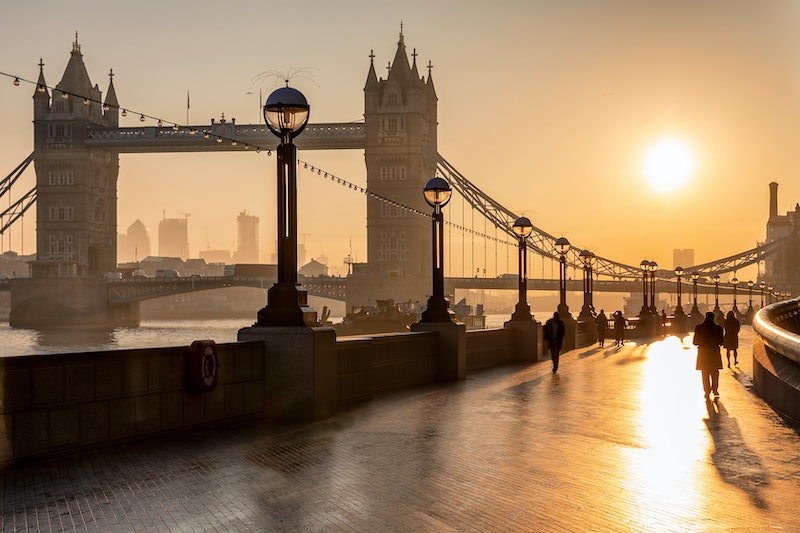 Who doesn't love a bit of heat in the summer months? The UK is usually known for its fickle temperate climate, but this week could see the British Isles reaching record-breaking highs of 37C. While I love that this tropical weather is perfect for soaking up the sun in parks, visiting the seaside, and having BBQs, I can't help but think that this is less of a hot girl summer and more of a cause for concern. So, is this July 2019 heatwave connected to global warming?

According to the Evening Standard, the previous record temperature for July was 36.7C, set at Heathrow, London, on July 1 2015. But this Thursday could surpass those records, leading to questions on whether these heat waves could actually be proof of the very imminent effects of global warming.

Even if we do reach 37C, it won't be the only weather record set this year. The UK saw one of the hottest February days on record with highs of 20C on Feb. 26 2019. This is in a country that is more likely to experience sleet and snow in February than sweltering heat.

On top of this, June 2019 was globally the hottest June on record ever on Earth. Professor Hannah Cloke, natural hazards researcher at the University of Reading, responded to a question from the Independent about the June heatwave by saying:

“Heatwaves occur in any climate, but we know that heatwaves are becoming much more likely due to climate change. The global climate just keeps getting hotter, as greenhouse gases continue to build up, as scientists have predicted for decades.”

Now in July, the heat is back and the scorching temperature is said to be due to a "plume of Saharan air," as Sky reports. And Britain isn't alone in the boiling summer heat; other countries in Europe are being affecting by the Saharan air, some experiencing seriously dangerous consequences.

The Copernicus Emergency Management Service has warned for the highest threat level for forest fires across the majority of France and Spain this Thursday. Luxembourg, Belgium, and the Netherlands could also see record temperatures this week. Spain is experiencing the worst wildfires for 20 years as temperatures reach 40°C in parts of the country. And, according to Insider, some areas in Europe "could be as much as 12C hotter than usual for this time of year."

Last year's 2018 heatwave in the UK led to a number of investigations around climate change, one being held by Met Office. Professor Peter Stott, a climate experts at the Met Office and the University of Exeter, revealed that this study "compared computer models based on today’s climate with those of the natural climate we would have had without human-induced emissions." He continued: "We find that the intensity of this summer’s heatwave is around 30 times more likely than would have been the case without climate change."

On July 15 2019, climate scientist Michael Mann responded to the reports about June's record numbers with the following tweet:

In their UK Climate Projections 2018 (UKCP18), the Met Office predicted that "by the end of the 21st century, all areas of the UK are projected to be warmer, more so in summer than in winter." It also stated "hot summers are expected to become more common. In the recent past (1981- 2000) the chance of seeing a summer as hot as 2018 was low (<10%). The chance has already increased due to climate change and is now between 10-25%. With future warming, hot summers by mid-century could become even more common, near to 50%."

With the record heat we're experiencing at the moment, it's hard to deny that the Met's predictions seem to be coming true. While we are out enjoying the sun, we need to remember what is happening to the planet and take steps to ensure we're doing all we can to help it.