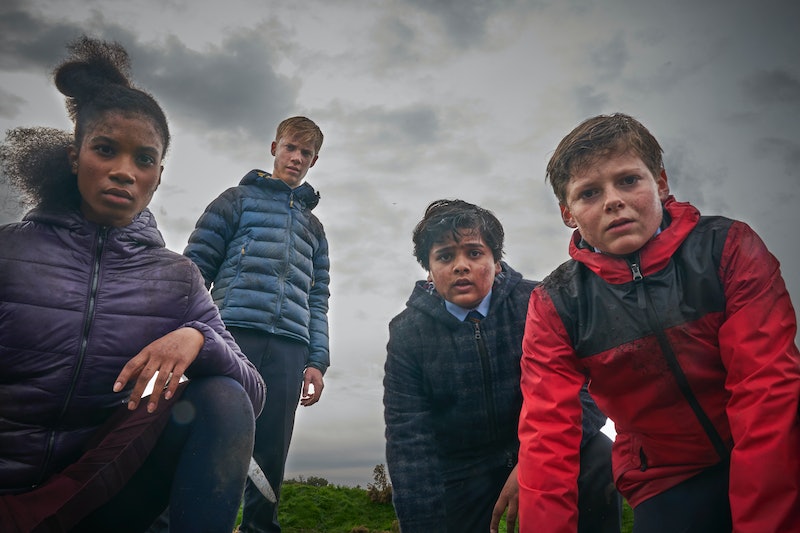 Sometimes a story is just so good that it doesn't matter how many times you've heard it, it'll never get old. The new movie, The Kid Who Would Be King, out Jan 25, falls into that category as it retells the medieval story of King Arthur drawing the sword from the stone and becoming a leader. While The Kid Who Would Be King is not based on a specific book, there are plenty of books out there that tell the tale of King Arthur's court. The trailer for The Kid even shows the main character, Alex (Louis Ashbourne Serkis), holding a (fictional) copy of a book about the British king.

If you want to read up on the stories of King Arthur — and his legendary Round Table — then you can check out the classic illustrated book, King Arthur and the Knights of the Round Table by Howard Pyle, or you can read a more advanced read, The Once and Future King by T.H. White.

While knowing about the history of the legend of King Arthur's Court might help you appreciate The Kid Who Would Be King, a history lesson isn't really requisite to enjoy this updated version of the fictional tale. The result of setting the legend in present-day London is a reimagining that features a bullied schoolboy who becomes a brave leader of knights.

As much fun as the new movie seems, it's also a great primer to one of the stories that serves as a foundation of many renowned fantasy movies and shows. For example, the sword that Alex pulls out from a stone, Excalibur, is reminiscent of the Sword of Gryffindor in Harry Potter. The HP Wiki even confirms that the sword which Harry uses to destroy Horcruxes bears an uncanny resemblance to the Excalibur and its legend.

The actor who plays Alex in The Kid Who Would Be King, Louis Ashbourne Serkis, is no stranger to fantasy, as his father is actor and director Andy Serkis, who played Gollum in Lord of the Rings. More recently, Andy played Supreme Leader Snoke in the last two Star Wars movies, so the fact that Louis will play a hero proves that the apple can fall far from the tree.

The rest of the cast of The Kid Who Would Be King includes a whole crew of newcomers who seem ready to become the new generation of the genre. Louis is joined by the young actors Dean Chaumoo, Tom Taylor, Rhianna Dorris, and Angus Imrie in the mythological movie.

In a recent interview with The Hollywood Reporter, 17 year-old Taylor, who plays Lance (based on Lancelot), described feeling like he was meant to play his character. "I remember getting there and saying, 'I’m definitely Lancelot.' ... And I remember meeting Merlin — Angus Imrie — and as soon as I met him I was like, this guy is definitely Merlin, everything about him is Merlin," Taylor said.

It kind of sounds like these kids were meant to play these characters, just like King Arthur was meant to pull the Excalibur from its stone. Let the myth-making begin.

More like this
Everything You Need To Know About ‘Black Panther: Wakanda Forever’
By Bustle Editors
Lindsay Lohan & Jonathan Bennett Celebrated Mean Girls Day Very Differently
By Jake Viswanath
Christian Bale Sang With Taylor Swift & His Daughter Can't Believe It
By Radhika Menon
Everything To Know About The Long-Awaited ‘Community’ Movie
By Stephanie Topacio Long
Get Even More From Bustle — Sign Up For The Newsletter