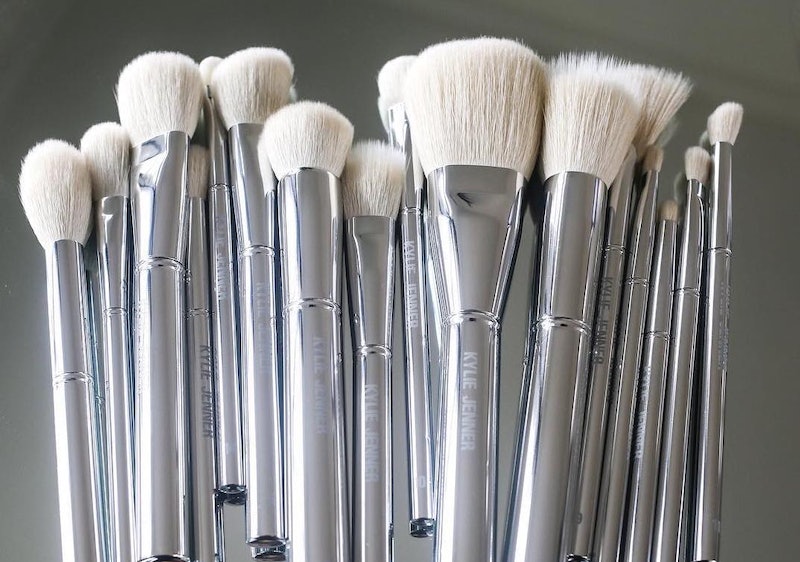 There's never a shortage of controversy in the beauty world, and the latest one unsurprisingly revolved around Kylie Cosmetics. The Kylie Jenner created brand revealed their second holiday collection, but reactions to one release in particular was extremely mixed. The Kylie Cosmetics Silver Series Brush Set's price created quite the holiday kerfluffle on the internet. With a cost of $360, many fans weren't exactly stoked about the set. Now, beauty vloggers have started receiving the brushes, and reviews are rolling in. The biggest question being asked by all: Are the brushes worth the cash?

Fans of Kylie Cosmetics will soon be able to find out for themselves soon. The brushes — featuring 16 tools and a silver brush roll — came out on Dec. 13. But considering the hefty price tag, even the most loyal fans may be questioning purchasing the kit.

If you're asking why Jenner chose to price her brushes at $360, she defended the decision on her Twitter but acknowledged her fans' complaints. In her defense, she argued that the brushes are not synthetic but made from real hair which makes them more expensive. She then cited brands such as Kevyn Aucoin and MAC for a price comparison — but it didn't go over well with fans give the prestige status of her comparison brands.

Regardless of the controversy, however, the most important thing is whether or not the brushes are, in fact, worth that price. If they are, controversy averted. If not, well, thank the beauty gods for dupes, right?

Here's what beauty gurus and influencers saying about the Kylie Cosmetics brushes.

MannyMUA is definitely not one to hold back when it comes to his opinion. Whether it's a luxury brand or a drugstore find, he lets his subscribers know what is worth their cash. Does he think the brush set is worth it's $360 price tag? Check out his review for some straight forward opinions.

Like MannyMUA, Laura Lee is a pro at reviewing new products. That hasn't changed with the new Kylie Cosmetics brushes. Not only does she use each brush in her video, but she at the end, she runs down dupes and alternatives for all 16 brushes in Jenner's kit. If you already know these silver tools aren't for you, check Laura Lee's video for the perfect alternatives.

If you're curious about more than just the brushes, Nicol Concilio has you covered. She tests both the Kylie Cosmetics brushes and the new concealers. Concilio did have a favorite type of brush, but did she like they overall? You'll have to watch her video to find out which of the set performed the best the beauty guru.

As of press time, Concilio, MannyMUA, and Laura Lee are the only major bloggers who have posted their reviews of the brushes, but more reviews are sure to start pouring in after the launch.

For most people, $360 is quite the hefty cost, and no one should try to break the bank purchasing all 16. But if you do want a Kylie Cosmetics brush, they are being sold separately with the individual prices ranging for $48 to $18.

If your brush collection is set for now, though, waiting may be a good call. When Jenner took to Twitter to defend the cost of her brushes, she did acknowledge that a synthetic brush set would retail for a cheaper price and that she'd be "down" to create one in the future.

Bottom line: Don't worry too much if can't purchase these brushes now. More brushes might be coming from the brand at a cheaper price — and everyone can get behind that.