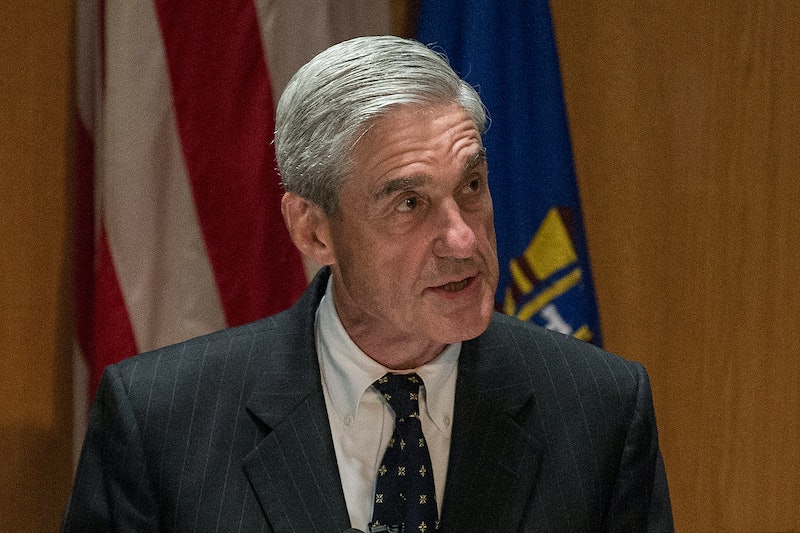 It's no secret that President Trump isn't thrilled about special counsel Robert Mueller's FBI investigation into his campaign. But the drama escalated Monday morning when the president questioned if the Mueller investigation is constitutional. "The appointment of the Special Counsel is totally UNCONSTITUTIONAL!" Trump tweeted, two hours after claiming he has the "absolute right" to pardon himself.

Trump didn't explain why he believes Mueller's appointment is unconstitutional, but others who've made the same claim argue that Mueller has the power of a U.S. attorney, despite the fact that he wasn't nominated by the president nor confirmed by the Senate. The law doesn't require that a special prosecutor be nominated and approved by Congress, though. The job of a special prosecutor is to investigate and potentially prosecute an issue where a conflict of interest exists for the authorities who would normally handle the situation.

Mueller was appointed by Deputy Attorney General Rod Rosenstein last May, after reports surfaced that Attorney General Jeff Sessions didn't disclose Russian contacts during his Senate confirmation. His appointment also came after Trump fired former FBI Director James Comey. Because the original FBI probe was centered around Russia, Sessions' contacts were seen as a potential conflict of interest, and he formally recused himself from the investigation in March 2017.

Special prosecutors have been appointed without Senate approval since 1875, when an outside attorney was hired to investigate how whiskey distillers defrauded the government with the help of federal officials.

During the Watergate scandal, the U.S. attorney general appointed special prosecutor Archibald Cox to find out who broke into the Democratic National Committee's offices. Cox was confirmed by the Senate, but The New York Times noted at the time: "There is no legal necessity for the appointment to be approved by the Senate." The attorney general asked for Senate approval “to provide the maximum possible assurance to the public that truth and justice will be properly, thoroughly and effectively pursued,” according to a letter he wrote to Democratic Sen. Adlai Stevenson.

Many comparisons have been drawn between the investigations into Nixon's and Trump's presidential campaigns, but on the most basic level, both probes were looking into a sitting president's bid for the White House. The government's checks and balances were designed to hold all federal officials accountable, including giving the Justice Department full authority to investigate the president and staffers close to him.

In fact, the Justice Department is run completely independent of the White House. As the Associated Press explains:

Long-standing protocol dictates that the FBI and Justice Department operate free of political influence or meddling from the White House. That's one reason that the FBI director serves a 10-year term and does not turn over the reins as presidential administrations come and go.

Although Trump has claimed the FBI probe into his 2016 campaign's relationship with Russia is a "witch hunt" orchestrated by "13 very Angry and Conflicted Democrats," Mueller has a history of nonpartisanship and was actually a registered Republican in 2001.

In terms of Trump's assertion that he could pardon himself even though he says he's done "nothing wrong," many constitutional experts disagree. Louis Michael Seidman, professor of constitutional law at Georgetown University, told The Guardian: "In a constitutional republic, the president has an obligation to obey the law. Part of his oath of office is to take care that the laws be faithfully executed, and pardoning himself is not the faithful execution of the laws."

While Trump continues to debate the need for and motives behind the special prosecutor's investigation, one thing remains clear: Mueller's job is constitutional.