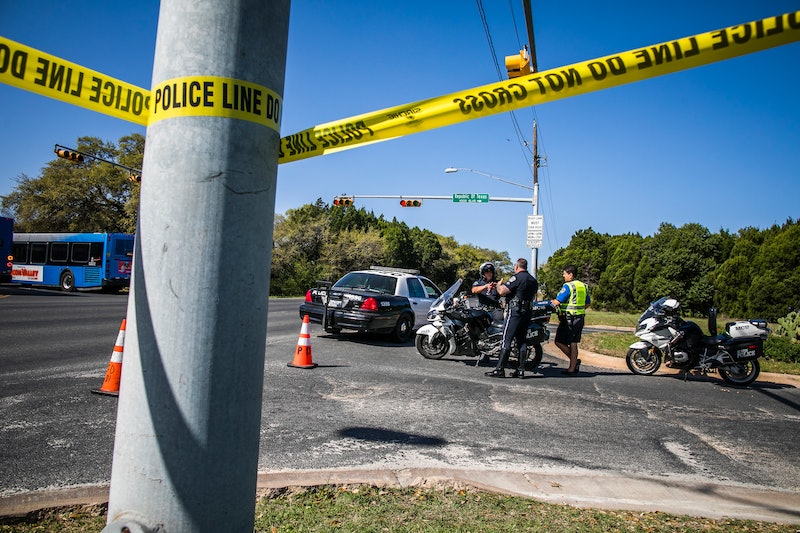 A package en route to Austin, Texas, exploded at a FedEx distribution center outside San Antonio shortly after midnight on Tuesday. Authorities say it's "more than possible" the San Antonio bomb is related to the Austin explosions that have occurred throughout the past month.

The package that detonated may have contained nails and shrapnel, according to SanAntonioFIRE, a local emergency news site, which specified that the information was "unofficial." The FBI has not confirmed those reports. No one was seriously injured as a result of the explosion at the FedEx facility, but one employee suffered a non-life-threatening "percussion-type" injury. The Bureau of Alcohol, Tobacco, Firearms and Explosives and the Federal Bureau of Investigation were at the scene.

The incident occurred in Schertz, Texas, about a half hour outside San Antonio, and an hour away from Austin. This explosion comes just days after a fourth bomb exploded in the Texas capital, significantly injuring two people, ABC reported.

Austin Police Chief Brian Manley said at a press conference on Monday that he attributes these attacks to a potential "serial bomber." They're currently offering a $115,000 reward for anyone with information about the suspects.

Since the package that exploded in Schertz was headed to Austin, police are investigating if and how this latest incident is related to the four other bombs. According to officials, 75 employees were detained at the FedEx facility for questioning.

The latest explosion in Austin on Sunday was triggered by an invisible tripwire, which suggested a "higher level of sophistication" than authorities had seen in the three previous bombings. The first three bombings were hand-delivered packages, police said, that detonated once they were picked up by the residents outside their homes. The tripwire also suggested the culprits were going after random people, rather than orchestrating targeted attacks. These explosions were at first suspected to be going after prominent black families in Austin, according to local National Association for the Advancement of Colored People (NAACP) president Nelson Linder.

Two of the people killed in the bombings so far, Stephen House and Draylen Mason, were members of prominent African-American families, NBC News reported, and they knew each other. “They have a long history and go to the same church,” Linder told NBC. House was killed in the first bombing on March 2, and Mason was killed March 12.

Since the tripwire was a "significant change" in the bomber's techniques, according to authorities, police continue to search for a motive for the attacks. They've asked that the person responsible for the bombings reach out to them. "We don't understand why they are doing this," Manley said at a press conference after the fourth Austin bombing. "We have people here that he could talk to, and we would like that to occur."

Residents in Austin and the surrounding areas are being instructed by police to "remain vigilant and report anything suspicious," the Austin Police Department tweeted on Monday. "If you come across ANYTHING that looks suspicious, DO NOT touch, handle or disturb it," they wrote. "Keep a safe distance and call 9-1-1 immediately."

It could be a while before more information about the San Antonio explosion is known, ABC reported. A law enforcement source told the news outlet that it's going to take time before they can conduct any kind of post-blast investigation, since the site is still considered potentially dangerous. With other FedEx packages in the building, and their contents unknown, investigators will have to move more carefully.

For now, authorities said they "hope" this is an isolated incident and is in no way connected to the other four bombings. However, an FBI San Antonio spokeswoman, Michelle Lee, told CNN, "We suspect it is related to our investigation."