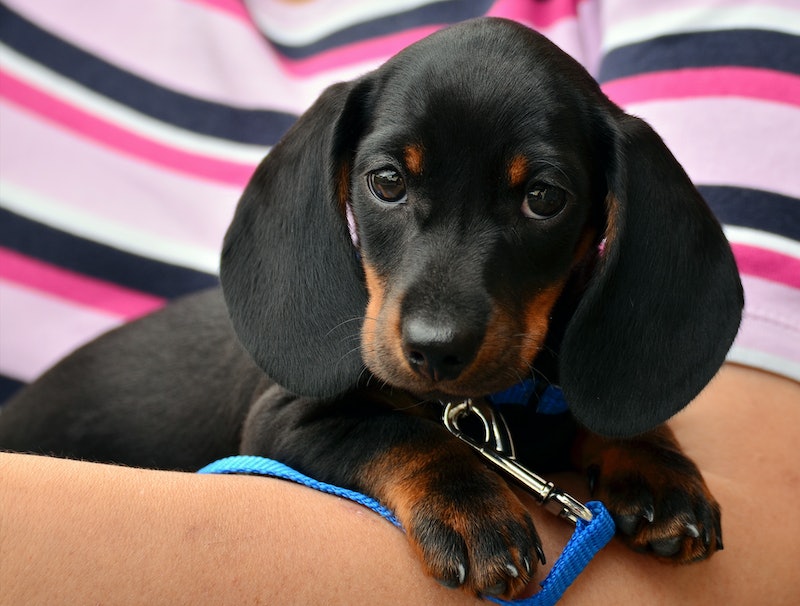 Got your total solar eclipse-viewing plans all worked out for Aug. 21? Awesome! But, wait — one thing. Is the solar eclipse safe for pets? The answer, it turns out, is a little complicated; some experts think that your pet will be fine outside while the eclipse is occurring, while others prefer to err on the side of caution. Regardless as to which decision you make, though, it’s worth considering the fact that there is a little bit of danger involved in letting your pet runaround outside during a solar eclipse — mostly because you can’t always control where your pet looks, or when.

The danger for pets is pretty much the same as it is for humans: Looking at the sun during an eclipse without adequate eye protection can result in some pretty gnarly damage to your peepers. Trouble is, while humans are capable of understanding this (hopefully) and taking proper precautions (hopefully), pets, uh… aren’t. Because they’re pets.

Often called “eclipse blindness,” the condition of suffering damage to your eyes due to looking at an eclipse is officially termed solar retinopathy. According to Live Science, solar retinopathy occurs when your retinae receive too much sunlight — an event of over-stimulation which then causes your retinae to release “communication chemicals” that can damage these sensitive parts of your eyes.

Weirdly, you won’t experience much, if any, pain while it’s happening — but it’s still no good. As pediatric ophthalmologist Vike Vicente recently said to the Washington Post, “You can stare at the sun during an eclipse for 10 minutes, and it doesn’t hurt. You can just look at it, and it’s really cool to look at it, but that whole time you’re literally burning the cells off your retina. And once they’re burned, there’s no repair, there’s no fix for it.”

Additionally, Ralph Chou, professor emeritus at the University of Waterloo’s School of Optometry & Vision Science, told Space.com, “I have seen instances where the patient has eventually shown up with crescents burned into the back of the eye, and you can almost tell exactly when they looked.”

CRESCENTS BURNED INTO THE BACK OF THE EYE?

Anyway, the OC Register also recently pointed out that there are a couple of different ways the rays from an eclipse can hurt your eyes. UVB rays affect the outer cells of the cornea, which can cause blurred vision (on top of being, y’know, painful); and UVA rays can hurt your eye’s lens, the retina, and macula, which could cause macular degeneration or permanent blindness. (For what it’s worth, though, Live Science also noted that “warnings of total blindness may be overstated.”)

The reason I bring all of this up is because it’s true regardless as to whether we’re talking about a human eye or a dog or cat eye. Live Science pointed to a statement made by Mike Reynolds, an astronomy professor at Florida State College, at the Northeast Astronomy Forum earlier this year: “Safe solar viewing is always a must, no matter who it is.” This includes dogs, cats, and other furred, feathered, four-legged, and scaled friends; indeed, Reynolds made this statement while showing a picture of his dog wearing a pair of solar eclipse glasses.

It’s worth noting that it’s actually probably pretty unlikely that your pets will suddenly decide to turn their gaze skyward at the precise moment the eclipse is capable of doing its worst. As Angela Speck, director of astronomy and professor of astrophysics at the University of Missouri, said in a press conference for NASA (via People), “On a normal day, your pets don’t try to look at the sun, and therefore don’t damage their eyes. And on this day, they’re not going to do it either.”

Still, though, better safe than sorry, as the saying goes — which, in this case, means either outfitting your pet with their own set of solar eclipse glasses, or keeping them inside with the shades drawn.

(If you are somehow able to convince your pet not only to don a pair of solar eclipse glasses, but — more importantly — to keep them on, then your pets are clearly better trained than mine are. I have a realistic idea of what would happen if I tried to make my cats wear solar eclipse glasses, sooooo… they will be staying inside on Aug. 21. Just sayin’.)

Fun fact, though: If you’re in the path of totality, you might observe some hilarious behavior from other kinds of animals when the sky gets dark. It’s going to look kind of like dusk, so farm animals like cattle and chickens might think that it’s time to head to the barn of the coop; bugs and frogs might start making those irritating noises they make during the summer at night; and birds might make begin chirping their, “Well, I’m off the bed!” chirps.

A total solar eclipse is basically Mother Nature’s ultimate fake-out, is what I’m saying — and it’s probably going to be pretty entertaining. Get ready!

More like this
Why Experts Say Sleeping With A Fan On Isn’t Totally Risk-Free
By Sophie McEvoy
The 6 Best UV Umbrellas, According To A Dermatologist
By Rachael Green
The 8 Best Indoor Door Mats For Your Home
By Jenny White
Young People Are Still Experiencing Period Poverty In UK Schools
By Sophie McEvoy
Get Even More From Bustle — Sign Up For The Newsletter