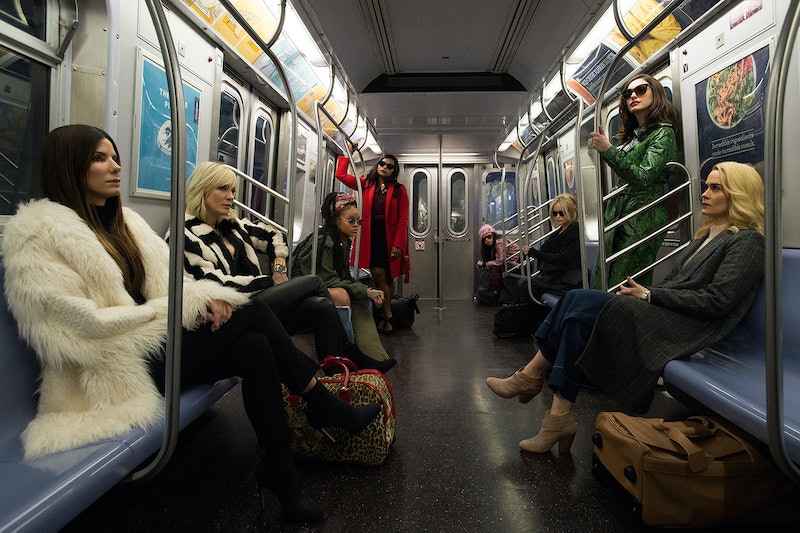 The Ocean's franchise is back, but this time instead of featuring George Clooney and his bros, Ocean's 8 is about an all-female crew led by Sandra Bullock's Debbie Ocean. Fans of the franchise can still expect the same type of camaraderie and extravagant heist-planning in this film as in the previous franchise installments, as evidenced by the big score the gang is after: the Toussaint Necklace. But is the Toussaint Necklace from Ocean's 8 real, or is it just a phony MacGuffin invented for the movie?

The necklace isn't real, but it was inspired by an actual historical — and priceless — piece of jewelry from the French luxury brand Cartier. The piece's design was taken from a 1931 necklace that Jacques Cartier made for the Maharaja of Nawanagar, according to Thomas Waller at WWD. That necklace contained the "Queen of Holland" diamond; a 136.25 carat blue-white diamond. The original necklace has been lost to time, but its blueprints remain at Cartier and were used by the firm to create the replica for the film, reports WWD. However, the movie version is made of cubic zirconia rather than diamonds, and are set in white gold, meaning it's not worth anywhere near the $150 million tag assigned to it in the film (though it's still a one-of-a-kind piece constructed by Cartier's high jewelry workshops in Rue de la Paix in Paris, so it's not cheap).

So now that you know where the design of the movie's necklace originated, it's time to go over where its name comes from.

The necklace is named for Jeanne Toussaint, who became Cartier's jewelry department director in 1933 — a position she held for decades, according to The Jewelry Loupe's Cathleen McCarthy. Toussaint is credited with shaping the creative direction of the company, and is also responsible for Cartier's symbol of the panther — the Jewelry Loupe reports that Toussaint's nickname herself was "The Panther." And since Toussaint was so instrumental in shaping the brand, and because she was a trailblazing woman in her industry, it just made sense for Cartier to pay tribute to her in the female-led Ocean's 8. "As a maison, and throughout our history, we cherish our collaborations that bring visionaries together to celebrate individuality, diversity, and [to] empower bold and fearless women," Cartier’s international marketing and communications director, Arnaud Carrez, said in a statement, according to The Hollywood Reporter.

The necklace is the main target of the film's big heist, as Debbie Ocean and her crew plan to swipe it at the Met Gala, and it was the only piece of jewelry made specifically for the movie by Cartier. However, the jewelry house did lend out a number of other pieces from their archives for the cast to wear in the movie — many of which contain real diamonds — as the official jewelry partner of Ocean's 8. The Hollywood Reporter states that Mindy Kaling wears a necklace and earring set made of diamonds and yellow gold from 1956; while Anna Wintour sports a diamond and platinum Lavalière necklace from 1906.

The Jeanne Toussaint necklace, as well as the jewelry worn by the cast in the film, have been temporarily put on public display at the Cartier Mansion, located on Fifth Avenue in New York City, in an exhibit that will run through June 8. The mansion itself also makes an appearance in the film, further establishing the connection between Cartier and Ocean's 8.

The Toussaint necklace in Ocean's 8 may not be a real piece of high jewelry, but the fact that it was based on a classic Cartier design, named for a legendary Cartier director, and built by Cartier's own expert artisans add up to make it a worthy target of the film's thieves nonetheless.