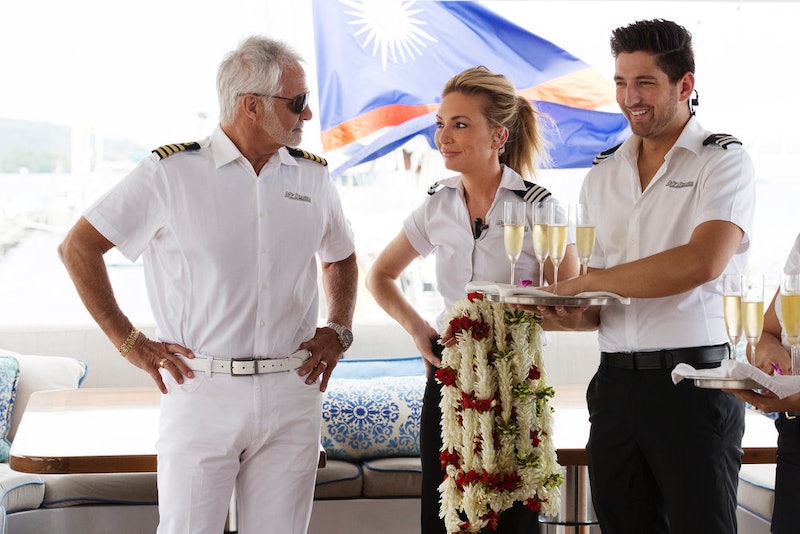 The Below Deck crew members are not characters on a TV show — they're real people who put their lives at risk in a potentially dangerous line of work. During Season 6, Ashton Pienaar almost died when he fell overboard. Luckily, a cameraman saved the day, because there wasn't a doctor on the Below Deck crew.

There have actually been a few medical incidents throughout the years on Below Deck when it could have been beneficial to have a doctor present. During some serious incidents, the cast has relied on outside medical attention on land. For example, on the most recent Below Deck Mediterranean season, deckhand Colin Macy-O'Toole left the boat for medical treatment after he hurt his wrist and thought he broke his toe. In that same season, bosun Joao Franco was rushed to the hospital when he had a high fever and came down with a virus.

For the minor aches and pains, the crew uses the resources that are already on the boat. During the first episode of Below Deck Season 7, chef Kevin Dobson asked Chief Stew Kate Chastain what kind of medicine they had on board when he came down with a stomach illness. Although Kate scrounged the first aid supplies for a solution, she is not actually a medical professional.

Aside from the first aid supplies on board, there are other safety measures in place. There is a crew member on board every single Below Deck season who does not usually appear on camera called the first officer, which is just a second in command person below the captain. That means Captains Sandy and Lee aren't technically alone all day and night and in the case of an emergency, they take over. Given the horrifying incident with Ashton last season, Captain Lee Rosbach introduced the cast (and viewers) to their first mate, Teh, on camera. He also told the group, "I'm going to put a huge emphasis on safety this year."

Typically, the first officer or first mate is the captain's right-hand person, a page from the Yacht Crew Agency explained. In addition to overseeing the deck crew, the first officer can also serve as a medical/safety officer, especially with a smaller crew, like the group on Below Deck.

For the most part, the first officer has not been a part of the series, although in Season 1 Aleks Taldykin was a cast member and first officer. There hasn't been an explanation about why the show no longer features a first officer in the cast, but that role is fulfilled on the boat every charter season regardless, just usually away from the cameras.

Aside from the first officer, all crew members must complete the STCW 95 training course. STCW is an acronym for Standards of Training, Certification, and Watchkeeping for Seafarers. During this training, crew members learn about boating safety, first aid, CPR, and fire fighting among other topics.

Although there isn't actually a doctor on board, every crew member does have medical knowledge and experience to administer first aid and assess when someone needs more help. Hopefully, they won't need any outside medical attention this season.

More like this
Every Season Of 'Love Island' Ranked Best To Worst
By Alice Broster, Frances Stewart and Sophie McEvoy
Rachel Responded To 'Bachelor' Fan Theories About Her TikTok With Clayton
By Grace Wehniainen
Erika Jayne's Estranged Husband Tom Girardi Has Been Indicted On Fraud Charges
By Jake Viswanath
Everything To Know About A Potential 'RHODubai' Season 2
By Kadin Burnett and Brad Witter
Get Even More From Bustle — Sign Up For The Newsletter
From hair trends to relationship advice, our daily newsletter has everything you need to sound like a person who’s on TikTok, even if you aren’t.