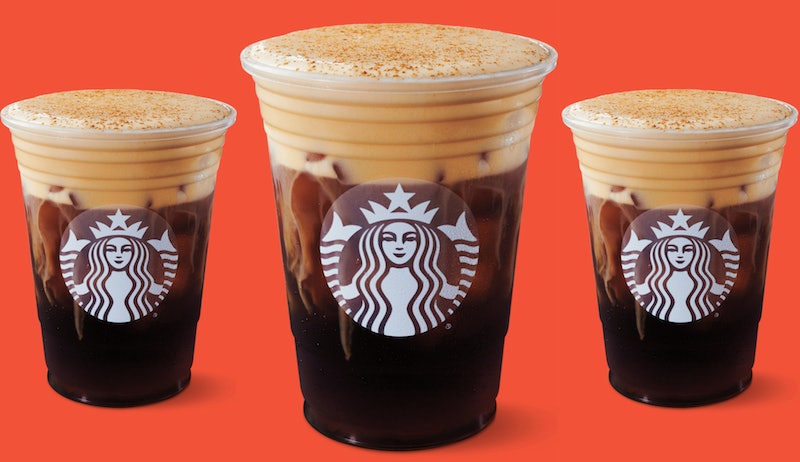 Autumn is well known for its multitude of unique phenomena. Leaves falling, cold weather rolling in, days getting shorter, Halloween festivities. And, in terms of the tastier side of things, one flavour that's uniquely autumnal is pumpkin spice. As with a lot of delicious treats, this particular trend has come from our pals over the other side of the pond. But, with Starbucks branches in both the UK and the U.S., the question is, can you get pumpkin cream cold brew in the UK? Because this new drink is too good to miss.

The iced beverage has been a huge hit over in the U.S. and I contacted the Starbucks press team to enquire if it's likely to become available here. I'll let you know of any updates on that. But as the UK autumn range has already been announced and the menus printed, it's not looking likely this year.

The drink, which combines the coffee giant's signature cold brew with a little extra vanilla has an extra special topping, which is really something to write home about. It has a pumpkin cream cold foam. Yes, I know. It'll be like the top of your regular latte but a gazillion times more delicious. And cold. And dusted with an oh so delicious pumpkin-spiced topping.

Right now, there's no sign of this dreamy drink over here in the UK, but I have reached out to Starbuck's press team to find out if that's going to change anytime soon. I'll keep you posted.

However, although we don't have the pumpkin cream cold brew over here, why don't we focus on the positives and what we do have?

This autumn has seen the return of the ever popular Pumpkin Spice Latte in UK Starbucks. This drink is a regular latte with oodles of pumpkin-spiced syrup, whipped cream on top, and pumpkin spice sprinkled over it to finish. Ouch, my arteries.

As well as that, for fans of a colder caffeinated beverage, the gang over at UK Starbucks have you covered, as they're also flogging a Pumpkin Spice Frappuccino and an Iced Pumpkin Spice Cold Foam Macchiato. Yes please.

I guess for a lot of people who've not tried the whole pumpkin spice craze, you might have a few questions. Like, to start, WTF is pumpkin spice? Is it actual pumpkin or what's going on?

According to the Huffington Post, pumpkin spice is in fact a blend of spices and flavours that are all meant to imitate the warming deliciousness of the American traditional Thanksgiving treat, pumpkin pie. The site writes:

"The mainstay spices include cinnamon, nutmeg and ginger. After that, it varies from place to place. Some pumpkin spices include cloves. Others draw on allspice. We've even found recipes that add mace. But you know what they don't all have? Pumpkin."

Lots of other companies have been getting involved with the pumpkin spice trend but one chain in particular has done a bit of a British version. Stalwart of the British high street and service station Costa have done their very own autumnal spice blend. But instead of going for the pumpkin spice tag, they've opted for their very own unique name and called it "Bonfire Spice." A fitting tribute to the traditional British bonfire night celebrations, which fall on Nov. 6.

I don't know about you guys but with all these creative offerings, I can't wait to see the Christmas menus.

More like this
Starbucks Released New Menu Items For The Summer
By Emma Garza
On TikTok, Orange Wine Is The Varietal Of The Summer
By Madeleine Aggeler
This TikTok Hard Seltzer Hack Involves A Milk Frother
By Alexis Morillo
Is The Insta-Famous Always Pan Actually Worth It?
By Jessica Goodman
Get The Very Best Of Bustle/UK