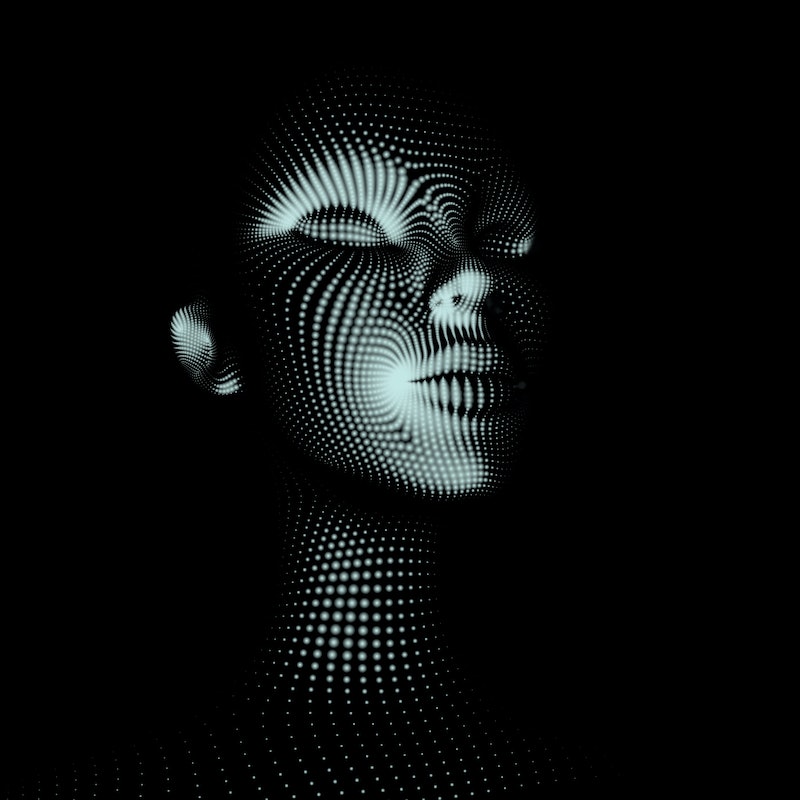 With a sex robot invasion seemingly coming around the corner, it's really easy to focus on the splashy-headline element of it all. But, in a recent episode of Stuff To Blow Your Mind podcast called " Sexbots: From Objectification to Therapeutic Surrogates", Robert Lamb and Christian Sager take a look at the more nuanced side of sex robots — and what we might expect in the future.

"Prior to researching the episode, I’d say I probably had more of a typical pop-culture idea of what a sexbot could be— interpretations based in expressions of victimization, suppression and loneliness," Lamb tells Bustle. "But as we often find on Stuff to Blow Your Mind, the dimensions run a bit deeper." When you actually take a step back and look at the current state, and future possibilities, for the sex toy industry, the potentials of sexbots become a lot more clear.

"I think a lot of the taboos involved and the sci-fi visions for dystopian possibilities cloud the issue a bit," he says. "Because, as we discuss, there’s already a cross-gender market for sexual technology. There’s already a need for technology-aided sex therapy for individuals with traumatic spine and genital injuries. We can already turn to examples of sexual surrogacy and the use of artificial humans to bridge certain gaps between desire and reality — no matter how problematic the latter can be."

As they point out, movies like Ex Machina and Her start to deal with the idea of emotional availability with AI and the idea of giving inanimate objects life more generally. In fact, the idea goes all the way back to Greco-Roman myths— but recently science has given it a modern twist. Look at all of the forward leaps in teledildonics, like using robot technology for more advanced sex toys that let you connect over long distances.

Using Them As Therapy Could Be Right Around The Corner

Well, that's where some people think sexbots are headed. But not everyone is happy about it. Dr. Kathleen Richardson, a robot ethicist, heads the Campaign Against Sex Robots. She argues that because robots embody the "human principles of dignity, mutuality, and freedom"— then having sex dolls is basically a manifestation of "violence and coercion". Not only that, she argues that they cement objectification of women and children, and, ultimately, will reduce human empathy.

But the hosts point out that sex technology is still clearly being created from a dominant, heterosexual male perspective and features "specifically, women who are owned by heterosexual men". The solution? "Maybe if we thought broader about our sexbots."

So could sexbots have a therapy role in the future? Here's what they studied:

A Solution For Pedophilia?

They also discussed sex robots as a potential solution for pedophilia. Could robots absorb suffering that would otherwise be put on humans? Now, this is unsurprisingly really controversial. But, as the hosts point out, according to the Mayo Clinic, current treatments for pedophilia, like CBT or chemical castrations, don't alter a pedophile's sexual orientation. Could a sex doll be a safe outlet? Or would it be a gateway? It's a difficult, but fascinating, question. And the science is still forming.

It could be used for couple's therapy or the restoration of sexual confidence after trauma. For example, Walter Reed Hospital has a sexual health and intimacy service, that features sex classes and sex toys — it's aimed at those who have suffered from genital or spinal cord injuries and need to learn new ways to explore their sexuality. Though often focused at soldiers post-combat, there are certainly other groups that could benefit. Another suggestion was that it could be used to explore your gender or orientation — or sexuality more generally.

But How Well Will It Work?

Will sexbots ever go beyond a punchy headline or the butt of a joke? Is the stigma around them too big to ever let them reach their potential— and help people who could benefit?

"The mist of stigma and taboo won’t be lifting any time soon, but I think therapeutic avenues present one of the best paths into mainstream acceptance."

"In our episode, we reference futurist Stowe Boyd, who predicted that 'Robotic sex partners will be a commonplace, although the source of scorn and division, the way that critics today bemoan selfies as an indicator of all that's wrong with the world.' I largely expect that will be the case," Lamb says. "Sex toys sell, but they’ll always be punchlines. The mist of stigma and taboo won’t be lifting any time soon, but I think therapeutic avenues present one of the best paths into mainstream acceptance."

But maybe the first step is addressing other prejudices and current issues, without that foundation there's little hope for true acceptance of therapeutic sexbots. "The more we address and rectify existing concerns with sex trafficking, gender discrimination, racial discrimination and homophobia, the better prepared we’ll be to tackle the additional cultural concerns that come with the existence of conscious-seeming humanoid robots."

It's a fascinating and conflicted area of technology, but it's interesting to see what the future will hold.