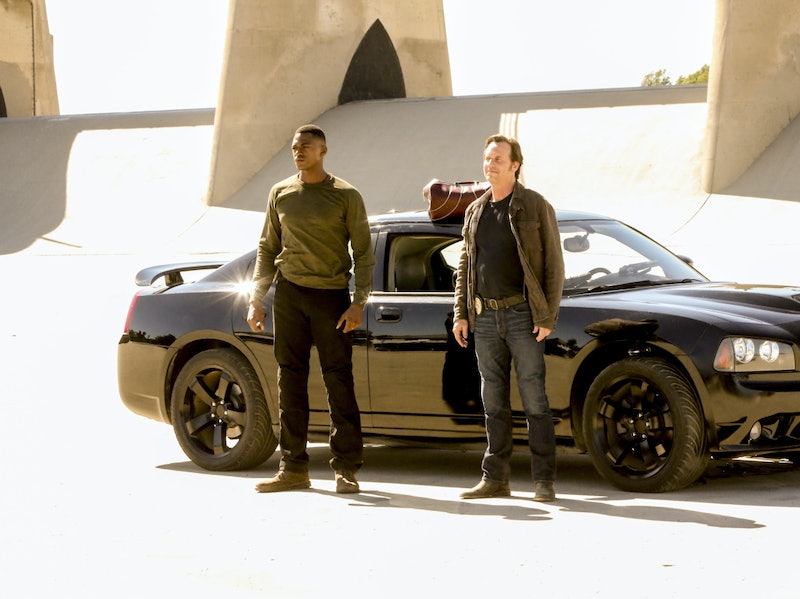 Crime drama aficionados, there's a new TV series to add to your weekly lineup — Training Day premieres on CBS on Thursday, Feb. 2. The new crime thriller, which stars Bill Paxton as Frank Rourke and Justin Cornwell as Kyle Craig, focuses on an elite squad within the L.A.P.D. When it becomes clear that Detective Rourke, head of the Special Investigation Section (S.I.S.), plays fast and loose with ethics in his role, the L.A.P.D assigns Kyle, a heroic young cop, to pose as his trainee and report back on Rourke's methods. The plot has all the makings of a gripping TV series, but is Training Day on CBS based on a true story?

It's marketed as a sequel to the 2001 film of the same name, which was inspired by the Los Angeles Police Department's Rampart corruption scandals, which were brought to light when, as part of a plea bargain for his own crimes, L.A.P.D officer Rafael Perez alleged multiple wrongdoing committed by his colleagues back in 1999, according to PBS. His testimony lead to several convictions of L.A.P.D. officers for various crimes, also according to PBS. (Bustle reached out to the L.A.P.D for comment about these old incidents but has not yet heard back.)

Viewers don't need to watch the movie in order to follow or enjoy the TV series, and it's a definite stretch to say Training Day is based on a true story. Although the film's events set the stage for the show, the plotline and characters aren't based on real people or situations.

According to CinemaBlend, it's established in the pilot that, 15 years after the events of the movie, the L.A.P.D. still hasn't recovered from the aftermath of Alonzo's (the Training Day character inspired by Rafael Perez) actions. Set in present day, veteran cops like Rourke are jaded by a recent crime wave and higher-ups are anxious to prevent another scandal from unfolding and becoming public.

Although it draws inspiration from real-life problems faced by the L.A.P.D., CinemaBlend notes that Training Day often requires a "suspension of disbelief," specifically when it comes to the depiction of how evidence is gathered and criminals are charged. And, like many other crime series, the action is amped up for dramatic effect. As Paxton told The New York Post, “[i]t’s a heightened reality, obviously. If we had that many shoot-outs in real life, we’d both be like sieves and be off the force.”

Despite its inspiration, Training Day is a fictional show with a major dose of dramatized action sequences — and, based on the trailers, it'll be a totally enjoyable watch for the crime drama fans amongst us.