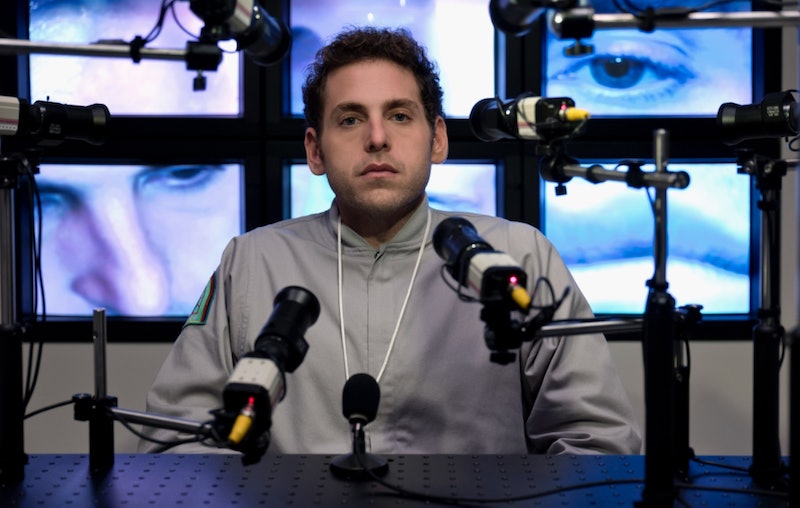 Emma Stone and Jonah Hill are the faces of Netflix's new sci-fi series, Maniac, and it's clear from the get-go that their characters are in for a bumpy ride. As Annie (Stone) and Owen (Hill), they play two people so desperate to battle their inner demons that they fall into the supposedly well-intentioned clutches of a weird pharmaceutical drug trial. It's enough to give anyone trippy nightmares, but is U.L.P. from Maniac a real drug?

As you might expect, all signs point to "no," which is great considering that the drug sends Annie and Owen's consciousnesses spiraling into strange alternate dimensions. A fake promotional video for Neberdine Pharmaceutical Biotech — the fictional drug company behind the trial — outlines all the effects U.L.P. is supposed to have on its patients, and while the idea seems nice in theory, it also feels highly suspicious.

According to Dr. James K. Mantleray and his associate, Robert Muramoto, conditions like teeth-grinding, anxiety, post-traumatic stress disorder, body dysmorphia, hypoactive sexual desire, and just "the blues" can all apparently be cured by taking the drug. However, other than promising U.L.P. "can fix you," the characters fail to give any other information about what the drug actually is, or, for that matter, what its name stands for.

They do promise that the drug will take effect in just three days, alleviating the need for years of counseling, therapy, or other time-consuming methods of healing and recovery. "It takes decades for therapy to even make a dent," Mantleray, played by Justin Theroux, says in the trailer. "Who has the time? The U.L.P. can make you happy, healthy, and normal in three days."

Of course, as he makes these grand proclamations, a message quickly flashes along the bottom of the screen assuring viewers the statements are "not evaluated by the Food and Drug Administration." Things look sketchy for this trial, to say the least.

But while Mantleray and co. seem pretty obviously nefarious, Theroux seemed to imply an interview with the Telegraph that his character has at least some sympathetic aspects to his personality. "He's one of those people that I like to describe as beautiful losers," he told the outlet. "He means well but he's just covered in flaws. He'd like to think that he presents himself as very put together but he's such a car accident of a man. He's vain, he's fame-seeking, he does that horrible thing of pretending to be altruistic when he wants approval more than anything."

Theroux went on to say that he doesn't think it's unrealistic for Maniac's characters to be intrigued by a far-fetched medicine like U.L.P. "If it worked, of course I would take a pill. If I could take three pills in sequence and cure myself of all my anxieties, pains and anguish, yeah. Wouldn't you?" the actor continued. "If you have a headache, you take a pill."

If your first instinct is to balk at the advertisement for U.L.P. and think you'd never be lured in by such lofty promises, that's understandable. But one of the points of Maniac seems to be that when people are in severe enough pain or confusion, they'll try anything to gain a little clarity — including a potentially dangerous, experimental cure. Based on the above trailer, that miracle fix might not be as easy for Annie and Owen to gain as the doctors insist, but they're willing to give it a shot. As for the mysteries of U.L.P., you'll have to tune into Maniac to find out the truth about its effects.