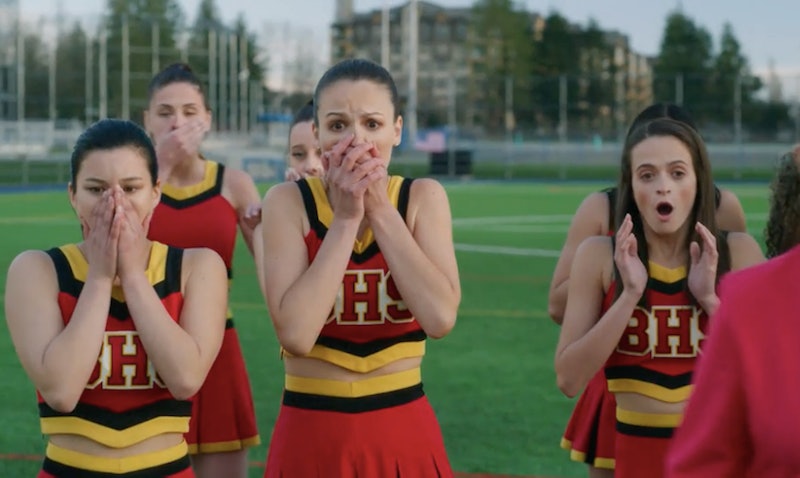 If we've learned anything from Bring It On, it's that cheerleading can be a cutthroat sport — but Lifetime's Undercover Cheerleader, pushes that concept to a much darker, sinister level. Considering the movie's grim premise, you'll be relieved to know that no, it isn't based on a true story. It will, however, make you think about the term "squad goals" in a whole new light.

The film stars When Calls The Heart's Kayla Wallace, as well as Maddie Phillips from Ghost Wars and Andre Anthony, whose credits include Victoria Gotti: My Father’s Daughter. Wallace leads the cast as Autumn, a transfer student who decides to write an exposé for the school paper on the cheerleading squad and the cruel social culture they've cultivated. In order to get the inside scoop, she decides to infiltrate the group by joining the team herself — aka, by becoming an undercover cheerleader. However, it doesn't take long for this secret assignment to become dangerous. "When someone begins viciously attacking cheerleaders, [Autumn] starts to fear for her own life," reads the movie's official synopsis. "Panic-stricken, Autumn never expected that her confidential journalism mission would lead to a fight for her life."

So who exactly is orchestrating these attacks on all the cheerleaders?Though your first guess might be that this unidentified attacker is someone who was wronged by the cheerleading team's apparently toxic behavior and is now out to seek vengeance, the trailer actually hints the opposite. "Someone needs to shut that girl up," says another student after the exposé is published, assumedly referring to Autumn. Could it be that the perpetrator is actually a cheerleader, attacking her fellow teammates to cover-up her real target of Autumn? It can't be a coincidence that this started happening as soon as Autumn went undercover, right? Or could it be a cheerleader who's just fed up with her squad?

Then again, the trailer could just be trying to throw us off; anything can happen in a Lifetime movie, and you can expect at least a few big twists. What is clear is that Undercover Cheerleader is the perfect mix between undercover cop comedy (21 Jump Street, Miss Congeniality) and Lifetime thriller. Except, you know, minus the comedy. Although sometimes Lifetime movies are so over the top, they are actually funny.

In any case, no matter what trouble befalls Autumn and her peers, you can take comfort in knowing the story is purely fictional and enjoy watching from the safety of your couch at home. (Pro tip: for maximum enjoyment, make sure to have plenty of popcorn and a pint of ice cream on hand.)

Will Autumn be able to solve this mystery and save the rest of her fellow squad members by the time the credits roll, or will she just end being the next target? Only time will tell, but let's hope these violent encounters don't end up taking a deadly turn. See how it all plays out when Undercover Cheerleader premieres Sunday, Sept. 15 at 8 p.m. ET on Lifetime.