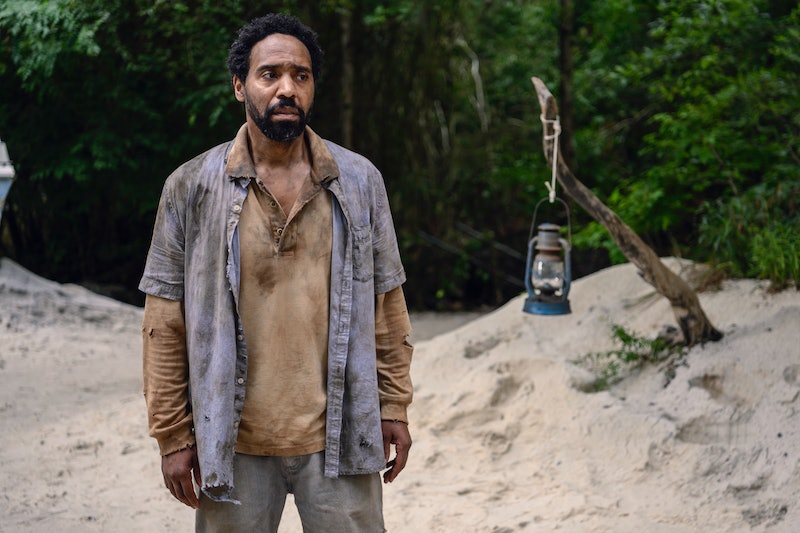 Virgil first appears when he saves Luke from a zombie in the Waterford library, but he ran away before revealing his identity. When Virgil emerges again at Oceanside, Michonne is extremely suspicious of him. Not only was he stealing a boat and sail from the waterfront community and messing with their security system, but she had just found that Dante was a Whisperer spy and had killed Siddiq. However, Virgil appeals to Michonne's sensibilities by saying he's just trying to get home to his family with supplies. He even unknowingly channels the dearly-departed Rick when he brings up the importance of mercy. But what really wins her over is when he reveals where he's from and that his community may be able to help her defeat the Whisperers.

Virgil says he's from Bloodsworth Island in Tangier Sound. This is a real-life location in the Chesapeake Bay that once was a naval base. Michonne decides to sail back home with him to retrieve weapons that could destroy the zombie horde that Alpha controls. Now, whether or not Virgil is 100% trustworthy is uncertain. AMC's official character description of Virgil only states that he is a "highly intelligent and resourceful man who is desperately trying to get home to his family." If he's anything like the comic book character people think he may be inspired by, Virgil could be telling the truth.

While Virgil isn't in the graphic novels, ComicBook.com noted that his appearance looks like Pete from the comics. Not to be confused with Jessie's abusive husband Pete from Alexandria, this Pete is a member of Oceanside. In the comics, Michonne spends two years as part of Pete's fishing crew (this plot is outlined in a Telltale Miniseries focused on Michonne).

Pete isn't a major character, but he's a kind and optimistic person. No one behind The Walking Dead TV series has confirmed a Pete-Virgil connection, but it's possible Virgil could be loosely based on him.

Michonne does put herself at risk by setting sail with this stranger, but it seems unlikely she is being duped by Virgil — even if Danai Gurira is set to leave the show this season. Instead, Virgil may extend the same mercy to Michonne as she extended to him now that they are on the water together. So while it's unclear if viewers will ever see this made-for-TV character ever again, Virgil could be the answer to how the communities get rid of Alpha for good, even though it's a very different path from the comics.