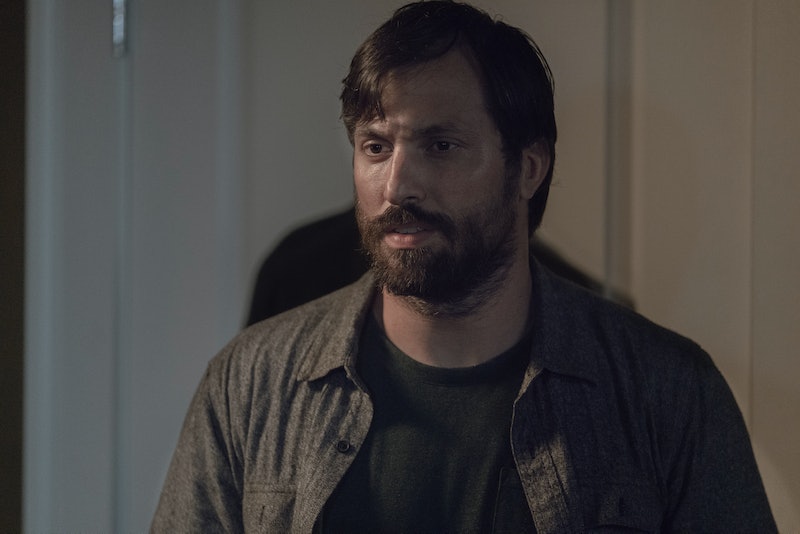 Spoilers ahead for The Walking Dead Season 10 Episode 7. Alpha's plan to destroy the communities took another deadly turn when Siddiq figured out that Dante is a Whisperer and then, to protect his secret spy status, Dante killed Siddiq on The Walking Dead for deducing his real identity. This was a tragic turn for the already-suffering Siddiq, especially knowing that Dante was prolonging the trauma that had caused his PTSD. But Siddiq was also the only person in Alexandria to know that Dante, or the Whisperers, are making people sick through contaminated water, so his death isn't just tragic. It leaves the rest of the community in serious danger.

The sickness in Alexandria was still spreading in "Open Your Eyes" and Siddiq was trying to find the source. But it became increasingly more difficult to concentrate over the past couple weeks as his visions and flashbacks of the Whisperer massacre at the Kingdom fair got more and more intense. Siddiq really began to question his sanity when Dante killed the Whisperer that Carol and Daryl had captured; Dante claimed that the death was due to some poisonous hemlock Siddiq put in the medical bag, but it might have been Dante who killed the prisoner in the name of protecting his cover.

Yet, even through all of this mental manipulation and abuse, Siddiq finally realized that Dante was the Whisperer who forced him to watch his friends die at the Kingdom fair. Knowing Siddiq had finally figured him out, Dante strangled Siddiq to death — putting an end to all those theories that Siddiq had become a spy for the Whisperers in the most devastating way.

There were signs that Dante was a Whisperer since his introduction. In the Season 10 premiere, Siddiq experienced a flashback to the massacre when looking at Dante's lips. But Dante gave himself away in "Open Your Eyes" when he made a "tick tick" noise that led Siddiq to make the connection to him and the brutal killings. Perhaps Dante knew it was inevitable that Siddiq would put it together soon or maybe he was overly confident that he could continue to trigger the doctor's PTSD without him realizing. Either way, Dante not only took out Alexandria's actual doctor, but now he can potentially keep poisoning Alexandria with the tainted water and gaining intel for Alpha.

The person most likely to figure out that Dante killed Siddiq is Rosita. She was with Siddiq when he realized that the water is causing the community's illness. Unfortunately, he hadn't realized that Dante was responsible for tampering with the taps and Siddiq also didn't tell Rosita about the water. (It's not entirely clear if Gamma's damming of the creek is what has allowed Dante to make Alexandria sick.) Yet, she knows he had been close to uncovering what was making everyone sick and where he was at mentally — so she'll find his sudden death suspicious.

If she believes Siddiq was murdered, Dante should be Rosita's number one suspect. Besides his off-putting behavior, he's new to the community and had the most access to Siddiq. She'll also be the most personally invested since Siddiq is the biological father to her daughter Coco. So perhaps one positive to Siddiq's death is that viewers will see a tenacious Rosita ready to fight again.

Along with if the group will figure out that Siddiq was murdered, another question is if Lydia had known Dante's true identity. She was familiar with the Whisperer Carol and Daryl had captured, so it seems odd she wouldn't have recognized Dante. Lydia seems to be telling the truth to the group, so it's possible that Lydia never saw Dante without his skin mask on. But maybe she ran away this episode not because she was hurt that Carol had used her to expose Alpha's lie to Gamma, but because she knew Dante may be exposed soon.

Dante could flee Alexandria after Siddiq's death and return to the Whisperers, but that might not be in Alpha's plan. He's the Whisperer that has gained the most trust with the enemies which means Alpha might not want him to leave his post suddenly. But while he may have been able to con his way into the community and manipulate a vulnerable Siddiq up until his death, Dante is not that good of an actor.

He had given Siddiq weird vibes throughout Season 10 by being overly familiar and calling himself a "god." So while Siddiq didn't deserve to die, his death may finally lead to Alpha's mole being exposed, saving the communities in the long run.