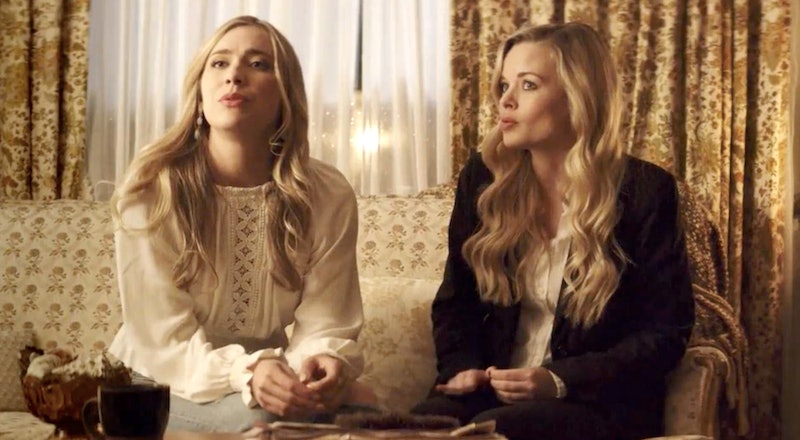 There’s no shortage of real-life incidents where obsessed people try to hurt or even kill celebrities and social media influencers. Lifetime’s latest flick Web of Lies is not based on a true story but it sounds like something that could happen to anyone who is Internet famous.

Per Lifetime, Shoshana Bush stars as Whitney, a Boston-bred social media star who moves back home for a fresh start. Everything seems great in her life with a solid career and a potential love interest named Mike, who just happens to live next door.

But, Whitney’s sister is suspicious about his strange behavior and tries to warn her obviously gullible sister that he is probably untrustworthy. Things start to go downhill when someone ruins Whitney's career and — surprise — her sister suddenly disappears. Now, she believes Mike may have a dark past that's putting her in present danger. And, in the spirit of Lifetime, she will probably have to kill him so she can reclaim her life.

In the Web of Lies trailer, Mike wastes zero time going into complete creeper mode. He waves innocently at Whitney from across the lawn at first and then appears to install some sort of camera in her home the next moment. Mike continues his weirdness by standing in the open beside a train track in all Black and spying on Whitney as she clinks wine glasses with an unidentified man whose probably going to die. Whitney's sister warns her about Mike but is quickly kidnapped in her car.

A concerned Whitney starts to investigate and finds Mike's disturbing shrine complete with dozens of Whitney's photographs and notes about what she likes. There's also a snippet of an old lady standing in front of Whitney and saying murderer that doesn't make any sense at this point. At the end, she confronts him and says she could never be with a man who is, well, a stalker, kidnapper, and possible murderer. The web of lies is going to be very tangled and hopefully Whitney and her sister will make it out alive.

This clip leaves so many open questions. Who is the scary old woman who confronted Whitney in the dark? Perhaps she knows the truth about Mike. Why was Whitney's sister so wary of Mike? The trailer can't reveal everything, but maybe she saw him standing outside of the window like all Lifetime men.

Or, she may have asked around town and discovered that he was using an alias to cover up his true identity. And, why did Mike single out Whitney? It would be an interesting twist if he was obsessed with her social media persona only to discover that she had moved next door. Whatever the reason, Mike probably won't make it to the end of this movie.

Web of Lies may not be a true story, but it's the type of flick that's perfect for Lifetime fans to enjoy on a chill Friday night. See how Whitney uncovers the truth this Friday at 8 p.m. ET.