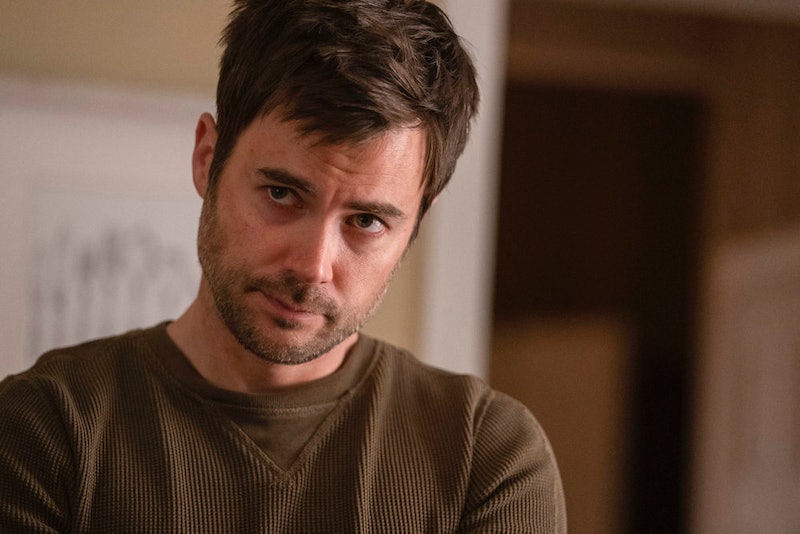 Everything is never as it seems on Manifest. You have potential government cover ups, passengers working as moles, and now a new guy who showed up out of the blue because he time traveled through a year of his life. I'm sorry, but Zeke seems shady on Manifest, and I don't know if Michaela and Ben should trust him so blindly. And a ton of fans agree.

If you search "Zeke" and "Manifest" on Twitter, a bunch of posts will come up with viewers discussing whether or not to trust Zeke. Here's what we know about him: He just showed up out of the blue to a cabin after being trapped in a blizzard. He has a strange obsession with Michaela because a photo of her in a magazine kept him going during the storm. And both Cal and Michaela had callings about him. We also know he was (accidentally?) responsible for his younger sister's death and has a general shady vibe about him.

Cal may have been drawn to save him, but he also seemed wary of Zeke after he got the wolf calling. And Cal drew the wolf at Michaela's apartment — where Zeke also happens to be staying. Maybe the truck driver isn't the wolf after all, maybe Cal's calling was about warning Michaela of the wolf in her very own apartment.

One Reddit user theorized that the love triangle between Zeke and Jared will be resolved because Michaela will eventually find out that Zeke is bad and choose to be with Jared instead. And Jared would probably love that because, according to Zeke actor Matt Long, Jared doesn't trust him either.

"When Zeke meets Jared, Jared is immediately hostile and doesn’t trust him," Long teased in an interview with TV Line. "Jared doesn’t trust me because I think Zeke maybe carries this 'air of mystery' about him." Um, YUP.

Long also said a similar thing about Jared in an interview with CinemaBlend. "When I meet Jared, it starts off tense ... Jared is automatically jealous of me and suspicious. Suspicious because he just gets a vibe from me, because I've had this dark past."

Long also hinted to TV Line that there are major cliffhangers in the finale, and Zeke is part of some of them, "including at least one of the biggest ones." Sorry, but non-shady people aren't just involved in huge cliffhangers. Something about Zeke doesn't smell right, and not just because he was stuck in a cave in one set of clothing.

One wild theory on Reddit about Zeke is that he's Saavi's mystery boyfriend. Viewers recently learned that Saanvi was supposed to go to Jamaica with her partner, but things didn't work out between them and she decided to go alone. Is Zeke the guy who broke Saanvi's heart?

Honestly, he could be anyone at this point and I'd believe it. This show is capable of any number of twists, which is exactly why Michaela and Ben should be more wary of Zeke. They've already been burned by the government treating them weirdly and also Autumn ratting them out to the Major — just because Michaela had a calling about Zeke doesn't mean he's a good guy. If I know this show (and I do), the Stone family better be careful.