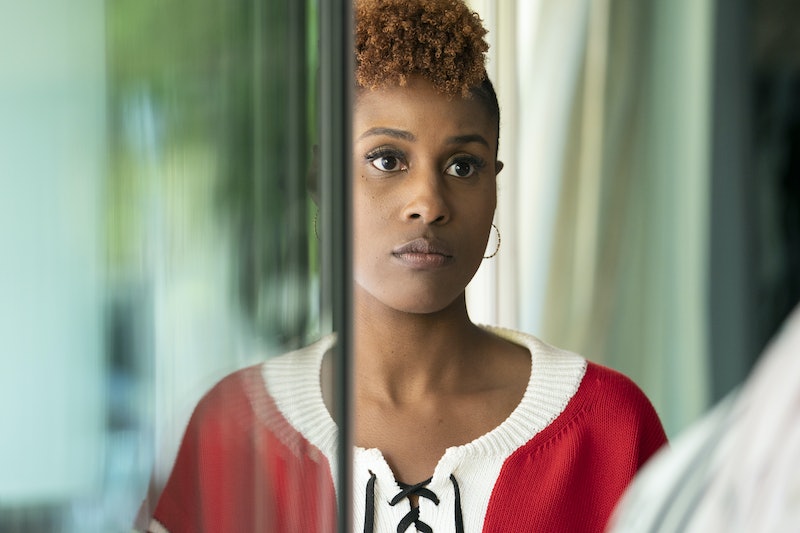 The return of Lawrence on Insecure aside, there is a more pressing matter with Season 3 of the HBO series that fans are less than pleased with after Sunday's episode. Yet again, Issa didn't use a condom on Insecure, despite the fact that the show's creators made a point to say they would. Some corners of Twitter were not into it, others are over the fact that those corners are so predictably not into it. Even before Issa's old flame showed up at the last second, it was hard to fully enjoy her Beychella hookup.

In 2017, according to Cosmopolitan, creator Issa Rae addressed fan concerns about the lack of condoms on Insecure on social media. "We tend to place condoms in the backgrounds of scenes or imply them," she said in a tweet that appears to have since been deleted. "But we hear you guys and will do better next season." The thing with Sunday's episode is that there's not a lot of "background" when you're having sex in a Ferris wheel pod at Coachella — as close to the Mile High Club as that may be.

Yes, this is television, and yes, there are other forms of contraception that wouldn't necessarily translate visually in the scene, and yes, representations of safe sex should not solely be Insecure's burden to bear. In this episode, too, Issa is high and in public and it's hard to judge aspects of her personal choice to have sex with Nathan without coming across as shaming her in some way. And real fans were definitely rooting for her to get it on with Nathan as soon as possible. However, if a series creator vows to be better about representing safe sex on screen than they need to show audiences something. At least, if they want to avoid live tweets like these:

Look. You're not wrong! It's a little bit of a broken record for sure.

Yup, we'll all waive the fantasy sex scenes. This is the one that counts.

Fair enough, not all of these tweets (and these aren't even half of the reactions on social media) are mad — it's hard to get that mad at a fictional character's choices. There are plenty of people online more interested in the setting of that scene. Anyone out there trying to figure out how to set up a date at a carnival now? How DOES one maneuver in a Ferris wheel pod?

Still, as amorous and sexy as that hookup between Issa and her new love interest Nathan was, it also glamorizes — as television has from the beginning of time — the idea that the best sexual encounters are too wrapped up in the passion of the moment to consider protection. In 2018, it sounds like viewers are OK with spotting a condom wrapper in a scene or hearing a character at least mention safe sex, STD testing, or contraception.

Unless, of course, this was intentional as a representation of Issa's current maturity level. That's not completely fair, as quitting her job and getting her own place were both definitely good moves, but the episode makes it clear that she's not in the same place as her friends and they can tell. At the end of the episode, Tiffany talks about how she hopes she and Issa will stay friends after her baby comes, which means Issa will likely grapple with more than where to find a condom 100 feet in the air. Issa is figuring out a lot this season, but some fans seem to be ready for her, and her male partners, to at least learn how to talk about safe sex since they're having so much of it.