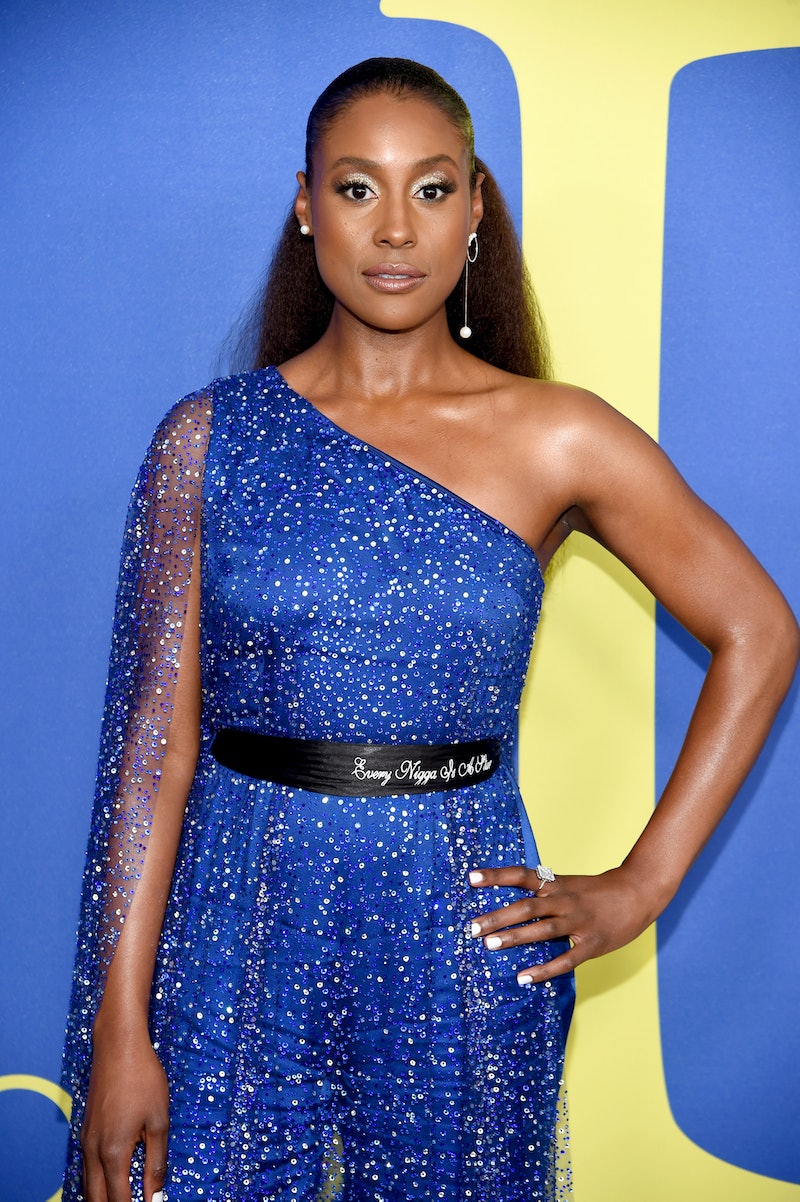 The CFDA Awards are a time to celebrate fashion as a whole, but the red carpet is about showing who you are and what you represent. This woman did that and more. As the first-ever person of color to host the awards show, Issa Rae choose outfits made only by Black Designers at the CFDA Awards. Because when all eyes are on you, you might as well make a statement.

There were zero black designers that walked away from the CFDA Awards as winners. Rae made sure that five got their time to shine though. According to the Elle Magazine interview, Rae exclusively black designers for all five looks throughout the night. From the labels to the little touches on the accessories, no detail was missed — including the "Every N---- Is A Star" embroidery on the reversible belt. The line is the title of a Boris Gardiner song, and it spoke loudly.

The outfits were only the beginning of the statements that Rae made throughout the night. In fact, some of the accessories spoke for her. Each outfit was an intentional push to get black designers in the spotlight and add her own personal touch to the night.

The night started with a navy blue, Swarovski-covered Kerby Jean-Raymond for Pyer Moss jumpsuit. It continued with Victor Glemaud, Sergio Hudson, Jason Rembert, and a custom Shanel. The colors were bold, the silhouettes were stunning, and the message was clear.

The blue jumpsuit shown previously in the piece had one special detail — the belt. According to Rae's stylist, this was a last minute detail on the outfit, but it was one to remember.

"We fit her on Friday, Kerby altered it on Saturday, and then Kirby sent me final images. I responded, 'Beautiful.' And Kirby responded, 'Every N---- Is A Star," says Rembert. "When I went to the fitting today I showed Issa the belt, which is actually reversible. I showed her both sides. And she was like, 'That's the one."

The second look was from Victor Glemaud's Resort Collection. If featured a boldly colored purple top and red body. Unfortunately, you're unable to snag this one for yourself, as it's not available on the brand's website.

This bright green pantsuit was an absolute stunner. Not to mention that she paired it with matching pumps that can only described with a chef kiss. According to the website, all the items are inspired by rock-and-roll and made right in Los Angeles.

This dress was custom designed by her stylist. The one off-the-shoulder sleeve was absolutely stunning, but didn't take away from her speech.

Never heard this name before? Well, that's because the young designer just started showing at Parsons, according to Elle. You won't be able to buy this look online, either. It's custom.

As if all of those stunning looks weren't already enough, she topped off her outfits with only black-owned jewelry designers as well. This is what they call using fashion it its full potential.