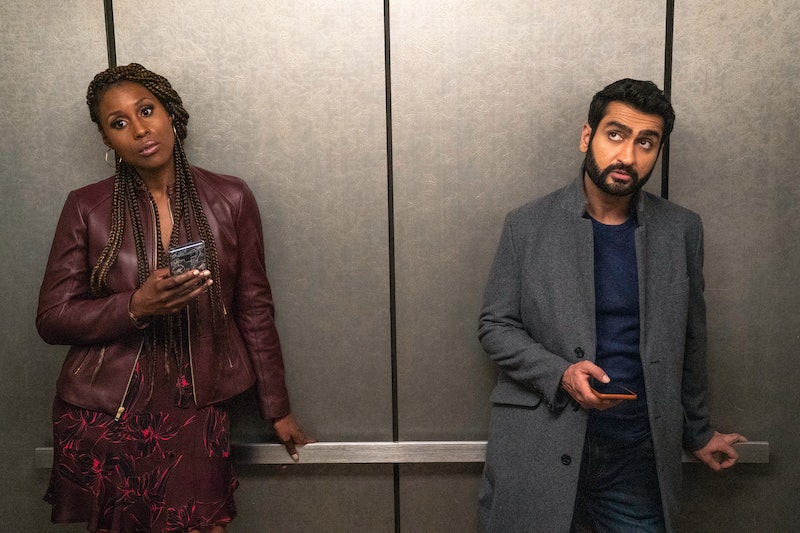 Writer, director, producer, and actor Issa Rae has a lot of jobs. After creating the web series The Misadventures of Awkward Black Girl, Rae's trajectory in Hollywood continued to rise by creating, writing and starring in a number of series including HBO's Insecure and A Black Lady Sketch Show. While writing and creating has always been her niche, with multiple film roles on her resume Rae is now spreading her acting wings a little more widely. On May 22 The Lovebirds hits Netflix and Rae's character is yet another chance for Rae to show off her acting chops.

Rae never set out to act, she told Teen Vogue last month, but she's been doing it more and more lately. "I just want to try different things [and] keep getting better … because I've never considered myself an actress." Despite also staring in The Photograph earlier this year, Rae also told the outlet, "[I've] always considered myself a writer-producer — and an actress for fun. I want to make sure that with each project I'm taking on, I'm bringing something to the table and not just showing up as me. A lot of people don't get this opportunity, so I don't want to take it for granted."

The Lovebirds stars Rae and Kumail Nanjiana as Jibran and Leilani, a seemingly perfect couple who experience a relationship-defining moment when they are accidentally dragged into a murder mystery. The film takes them from one extreme scenario to another as the duo tries to survive the night with their relationship in tact. The film was directed by Michael Showalter and also stars Anna Camp, Paul Sparks, Kyle Bornheimer, Kelly Murtagh, and Moses Storm.

The Lovebirds was set to premiere at the 2020 South By Southwest festival in Austin, Texas in March, but with the cancellation of SXSW due to the coronavirus pandemic, Paramount postponed the movie. It was then set to release in early-April, but again was pushed back. Finally, Paramount sold the film to Netflix, as Variety reported.

It's a definite plus that Rae is into the idea of acting more, but also great that she's going to keep creating, producing, and writing. As she recently told Bustle, "I'm always going to be ambitious ... but I also have the wisdom to know that I can't spread myself too thin. That's why I rely on other people around me. I work with a team of very smart, capable, and equally ambitious women."

More like this
Here’s Everything Coming To & Leaving Netflix In February
By Jake Viswanath
Ashton Kutcher Wants Danny Masterson “To Be Found Innocent” In Rape Retrial
By Jake Viswanath
'The Queen’s Gambit' Season 2 Tweet Wasn’t From Anya Taylor-Joy
By Mary Kate McGrath, Jack Irvin and Grace Wehniainen
'Wednesday' Star Emma Myers Thinks A Wenclair Storyline Is “Possible” In Season 2
By Alyssa Lapid
Get Even More From Bustle — Sign Up For The Newsletter
From hair trends to relationship advice, our daily newsletter has everything you need to sound like a person who’s on TikTok, even if you aren’t.