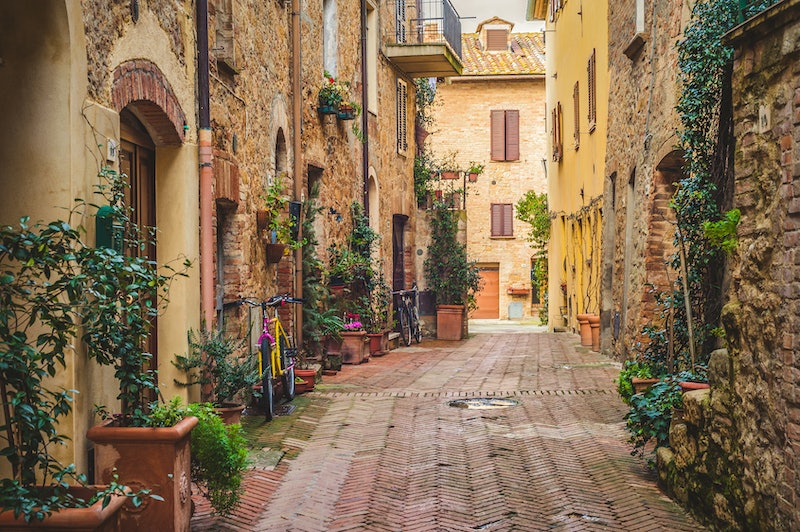 Well, guys, it's time to face the music: Our generation spent way too much money on avocado toast, and now we're probably tanked when it comes to saving for home ownership. OK, OK, while that is patently untrue — despite the avocado jokes galore, millennials have far more up against them financially than the occasional toast splurge — turns out the home ownership dream may not be as dead as we thought. That is, if you manage to buy one of these houses in Italy that are being sold for a dollar each.

Before you start daydreaming about your Instagrammable expat life and the wonders of living off of pizza and wine for the rest of your known days, you should know that there is, of course, a catch. According to CNN, the Italian town of Ollolai is selling 200 houses for one euro each — approximately $1.25 in U.S. currency — if the purchasers commit to refurbishing them within the next three years. As of right now, the homes are stone-built and in bad enough condition that it would cost an estimated $25,000 to restore them to the standard. The mayor of Ollolai, Efisio Arbau, is hoping that the initiative will help bring some life back to the community, and encourage more economic growth.

"We boast prehistoric origins," said Arbau to CNN. "My crusade is to rescue our unique traditions from falling into oblivion. Pride in our past is our strength. We've always been tough people and won't allow our town to die."

Ollolai, a town nestled in the Mediterranean island of Sardinia, is a picturesque, mountainous region, currently home to 1,300 people. According to CNN, that number is a massive decrease from the 2,250 residents it had just within the last 50 years; with many of its younger occupants leaving for big cities and a decline in births in Ollolai, many of the stone-built houses have been left and since fallen into disrepair. This deal Arbau is offering isn't just an opportunity to people to find a new home — it's an opportunity to help foster a community's growth again.

In order to start the process, Arbua told CNN he reached out to the former owners of the 200 houses that are now for sale, requesting that, for the sake of the community, they sign them over to authorities. Enough complied that Arbua was able to start this initiative, which has since gone viral — and for good reason. Despite their poor conditions, the buildings themselves and the surrounding area are quite lovely.

"They're picturesque old buildings made with Sardinia's typical gray granite rock that grows on mountain peaks and shores," said Arbau to CNN.

Of course, even if you can afford the one euro and subsequent $25,000, there are a few other things you'd have to factor in before you took the plunge. While U.S. citizens have the ability to move to Italy permanently, according to the U.S. Embassy, anyone staying over three months has to register for a permesso di soggiorno, or permit of stay; anyone staying over 12 months has to sign an accordo di integrazione, or integration agreement, stating that they will commit themselves to learning the Italian language, culture, and customs, earning a total of 30 credits over the course of two years. While the terms are more than reasonable, it's definitely not a commitment to take lightly — particularly since your income will be affected by your ability to get a job or take your work overseas.