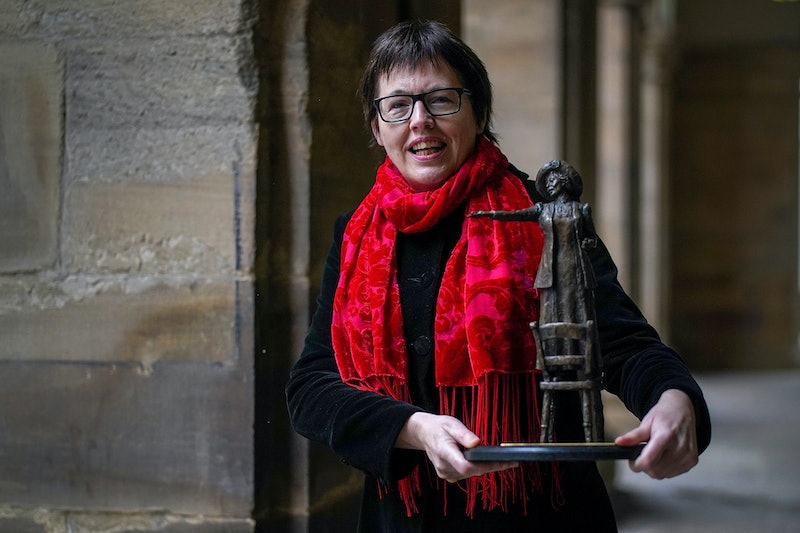 Are you registered to vote? How many times in your life do you think you have voted? It's now such an normal part of people's lives in the UK, really. However, y'all it has only been 100 years since the first ever time a woman was allowed to vote in the UK. Real talk. The OG feminist heroes that fought for us to be able to undertake our constitutional rights and laid down a standard which we are building on are important AF. So, this tribute to leader of the suffragette movement Emmeline Pankhurst is absolutely amazing, if maybe a little overdue.

Y'all sculptor Hazel Reeves has made a bronze statue of the hero, standing on a chair, doing her thing and demanding votes for women at one of the many rallies she organised, as the BBC reports. The statue is going to be unveiled today in Manchester by her great granddaughter. Hell yes, more bronze statues of female heroes please.

Hundreds of people are expected to march in memory and celebration of Pankhurst, beginning at Great Northern Square and finishing at St Peter's Square where the statue will sit. Manchester was where the Pankhurst and the movement itself was born — so a fitting location for the new statue.

I feel like I should flag that the image here is a mini version of the actual sculpture, so fear thee not Pankhurst fans. The chair of the Emmeline Pankhurst Statue Committee, Andrew Simcock said the new statue will be not only a celebration of her life and work, but also of Manchester's rich history:

"Helen Pankhurst’s vision and all those involved in this project have inspired what will take place on the day; this will be a coming together of people to celebrate Emmeline and her legacy and to also celebrate the essence of Manchester, as a place of progression, inclusivity and groundbreaking ideas."

As the BBC reports, Pankhurst was born 1858 in Manchester into a family with a tradition of radical politics, and who weren't afraid to fight for what was right. She started the movement and push for women to get the vote, alongside her daughters and of course a great many other brilliant women, including the incredibly Annie Kenney, who's statue made by Denise Dutton was unveiled today in Oldham.

Kenney might not be a name you are familiar with, and in fact many believe that her importance in the movement is often overlooked. Kenney was the only working class woman to hold a senior position in the Women's Social and Political Union, two of the main suffragette organisations, the BBC reports. In some ways, she is an even more important figure than Pankhurst in my opinion, because British feminism has had a bit of an issue re being largely a privilege of the middle and upper classes. So someone like her being overlooked compared to wealthier and more politically connected activists is absolutely the sort of taboo issue we face in contemporary feminism. Not to mention many believing feminism is only for cis-gendered women — don't get me started on TERFs — and neglecting to consider the way feminism intersects with other identities.

Hopefully as time goes on more and more women will have statues of them unveiled and the important history of feminism will be embraced because feminism is for every person and benefits every person. No matter their gender, race, or nationality.