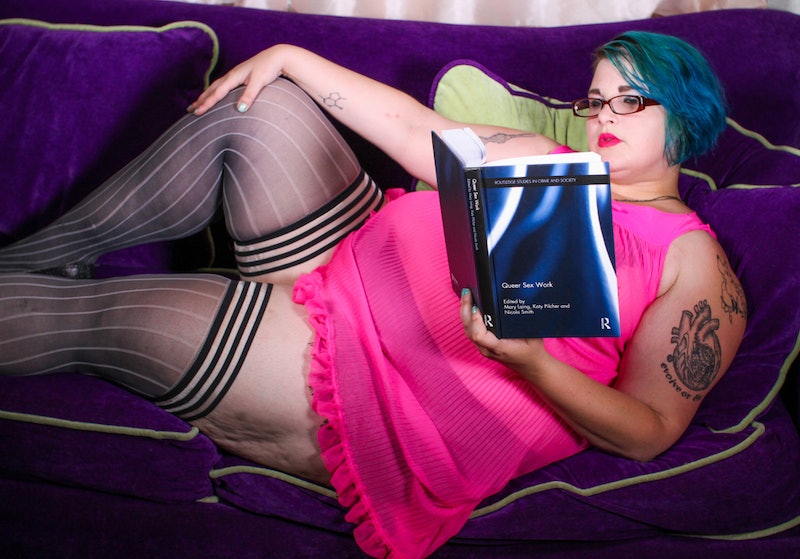 When I first left office work behind to start taking sex work jobs, I expected fewer restrictions on what I wore. I’ve long been uncomfortable with stringent office dress codes; the clothes mandated in most of those jobs rarely fit nicely over my ample hips or my large breasts, causing me physical and emotional discomfort, and almost all affordable “office shoes” hurt my feet. As a fat woman with purple hair, I feel that I look out of place in slacks and blouses. In fact, the dress codes were one of the factors that motivated me to leave office work entirely.

But as I began to take sex work jobs, I quickly came to a startling realization, one that I shared with many other workers: this was yet another industry where dress codes reigned supreme. And like most workplace dress codes, those enforced for sex work are designed to maintain the business’s bottom line — not the worker’s health, safety, or happiness.

Finding lingerie and stockings that fit my plus-size body took up most of a day and about half a tank of gas. My boss, who didn’t offer any guidance about where I could find this clothing in my size, had no idea how difficult it was to find clothes that fit, never mind clothes that were also sexy. I showed up my first day already $100 in the hole just in order to be able to work, wearing the same shoes I had hated wearing during my earlier cubicle nightmares. The lingerie I was able to find didn’t fit me especially well, and the heels made me feel like I was walking on glass.

Given all of this, it wasn’t a big surprise to me that I wasn’t often booked by clients. I initially thought it was because I wasn’t attractive enough, but when I quit a month later and began working independently, my unique style was one of the things my clients loved most about me. For sex workers, dress codes have very real financial ramifications — if we’re wearing clothing that is painful or makes us feel uncomfortable, we’ll have a harder time booking work. When I felt comfortable in my presentation and clothes, not restricted by pain or hating how I looked, I became a better version of myself. I imagined my increased confidence was clear to my clients, who liked seeing me happy.

I ran up against dress codes later when I looked into dancing at a unionized peep show that was inclusive of curvy performers and employed many queer people. I was excited by the idea of working in a peep show, surrounded by other queer people, especially as working independently was beginning to feel pretty lonely. I discovered, however, that if I wanted to be employed there, I’d have to be able to dance in heels — and not just any heels, but platformed stripper heels, teetering at four inches and above. I knew I didn’t need sky-high heels to be a successful performer, but those were the rules — and as someone who had an untreated ACL injury, it wasn’t gonna happen. So I reluctantly put aside my dreams of peep show employment, and continued to work alone.

It was only after I had moved away from the adult industry to pursue a career in writing that I began to talk to other sex workers about dress codes in their workplaces, and found that my experiences were not so unusual. Many of us had felt itchy and uncomfortable in “office attire” — some of us because what we were encouraged to wear didn’t resonate with our gender identity, others because our physical disabilities made things like wearing heels or pantyhose impossible. We figured that sex work would be a place that would celebrate our diversity rather than insist we fit narrow boxes of what’s been marketed as “desirable.” Little did we know that sex work would give us similar constraints, sometimes even more harshly implemented.

“Back during my dancing days, Portland was notorious for the Oregon Liquor and Cannabis Commission mandating that lap dances could not be given while nude — only ‘air dances’ with no physical contact between client and dancer,” former erotic dancer Katie de Long tells Bustle. “So to get around that, some clubs would offer lap dances fully clothed — and to get fully in accordance with liquor laws, you would have to literally be fully clothed. Not skimpy bikinis, but actual evening gowns. Have you ever tried wearing an evening gown plus platform stripper heels? I've never seen so many dancers trip in my life.”

But this dress code wasn’t just a tripping hazard; de Long says she saw that it was only enforced for some dancers — usually those whose performing personas were thought of by management as less “high class.” “I saw a lot of managers turning a blind eye to the ‘right’ sort of dancers doing illegal stuff (particularly sexual touching) during their gowned dances... but harassing or firing the ‘wrong’ kind [of dancer] for much less,” de Long says. “Because the gowns were part of the marketed appeal, giving a sense of glamour and classiness [to the club], it pushed aside performers whose personas or looks were seen to be ‘trashy,’ or ‘ghetto,’ or ‘low class’ — along with every other dogwhistle you can think of. Sometimes it was blatant, right from the management’s mouth, and other times it was self-selected, with the dancers deciding it wasn’t the right place for them because they [felt they] wouldn’t get hired."

While some workers felt that dress codes at sex industry workplaces were implemented to quietly and subtly enforce classism and racism by creating a narrow spectrum of acceptable appearances, others told me they experienced dress codes that enforced sizeism and cisnormativity.

Ruby, a genderqueer Domme, tells Bustle that she followed the posted dress code at the professional dungeon where she worked perfectly, adhering to all rules dictating which colors different workers were permitted to wear. But Ruby says the dungeon’s owner demanded that she follow rules that her coworkers didn’t have to abide by. “I...was told by the owner that I needed to ‘cover up’ more than the skinnier girls. I think her exact wording was ‘Curvy ladies like us need to cover up more than other girls,’” Ruby tells Bustle. “The skinny girls often had their bellies exposed in bra and panties. [The owner] wanted me only in corsets or nighties cause I’m bigger. I quit after that.”

Attempts to fulfill the feminized dress codes pushed by management often only served to make the workers uncomfortable — something that trickled down to how clients viewed them. “I was fat, and hairy, and 10+ years older than most of the other workers… and not gender-conforming,” Jody, who used to work at a massage parlor, tells Bustle. “The cattle calls (where workers are paraded in front of a client for them to choose who to book) were pretty awful, but once I got a customer, they tended to ask for me again.” Jody was encouraged to dress similarly to their coworkers, in overtly femme clothes. “Some of us wore lingerie, some went with the Daisy Duke look...Well, I feel ridiculous in any of that, and I'm sure I looked uncomfortable as f*ck. That didn't help me pull many johns in the cattle call, and the constant discomfort is most of why I didn't last long there.”

I didn’t last long at that dominatrix house either — I left after a month. In 14 years of sex work, I never let a manager tell me how to dress again, finding my niche far more successfully as the kinky nerd girl next door. It’s unfortunate that an industry that could so easily market to the wide diversity of personas and styles that people find attractive instead chooses over and over again to create dress codes that smother our individuality — and then penalizes us when our conformity is not up to par. Despite there being financial incentives to encouraging employees to dress in ways that make them feel comfortable and express themselves, many managers in the adult industry are stuck in the past, focused on archetypes that are tired and out of date. Often, industry bosses are still older white straight men, and whether it’s an office or a dungeon, their ideas of what a “sexy” woman should look like still keeps us all shackled.