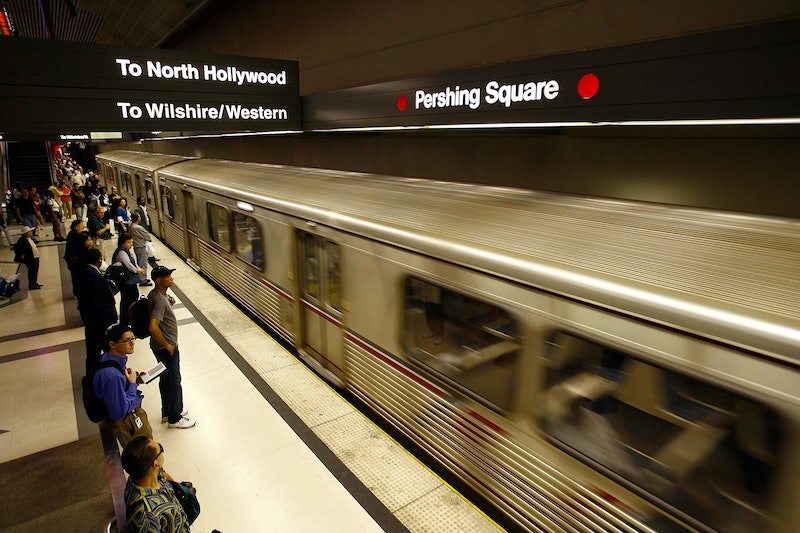 It's no secret that sexual harassment tends to be rampant on public transit. Rather than shrugging off the problem, however, the Los Angeles County Metropolitan Transportation Authority recently launched the "It's Off Limits" hotline providing counseling for riders who have been harassed and encouraging them to report their experiences, and it's sorely needed. (Bustle has reached out to the L.A. Metro for comment and will update if/when we hear back.)

According to the San Francisco Chronicle, the hotline is part of an effort to combat sexual harassment on the Metro following a 2015 survey, which found that more than one in five riders faces unwanted sexual advances or behavior while using the transit system in the first half of 2014. That's alarming enough on its own, but when they compared the number of riders who were harassed to the number of police reports filed about sexual harassment, officials found a significant discrepancy. Although a simple comparison isn't enough evidence to draw official conclusions, it's not at all outside the realm of possibility that few people who are harassed wind up reporting the incident to the police.

That's where initiatives like the "Off Limits" hotline come in. According to Cosmopolitan, the confidential hotline puts callers in touch with counselors and gives them the option to talk with the police. Appropriately, the tag line reads, "Sexual harassment is off limits on Metro."

The 24-hour hotline is staffed by counselors from the nonprofit Peace over Violence, which works to prevent "sexual and domestic violence, stalking, child abuse, and youth violence." The Los Angeles-based group's executive director, Patti Giggans, told the Chronicle that the hotline is ideal for when victims of harassment need a professional to help them work through their feelings about an incident.

The past few years have seen a shift toward recognizing sexual harassment in public spaces. The infamous "10 Hours of Walking in NYC" viral video chronicling the catcalls endured by a woman in New York City is still referenced today, and harassment been the subject of several Twitter hashtags over the years. (For a recent example, check out #UnsafeatUni.) Furthermore, numerous news articles over the last few years have shined a spotlight stories from people who have experienced harassment on public transit.

Unfortunately, it's guaranteed to be a long time before sexual harassment becomes less widespread, if it ever does, but initiatives like the "It's Off Limits" hotline are a step in the right direction. Let's hope other public transit systems take note.