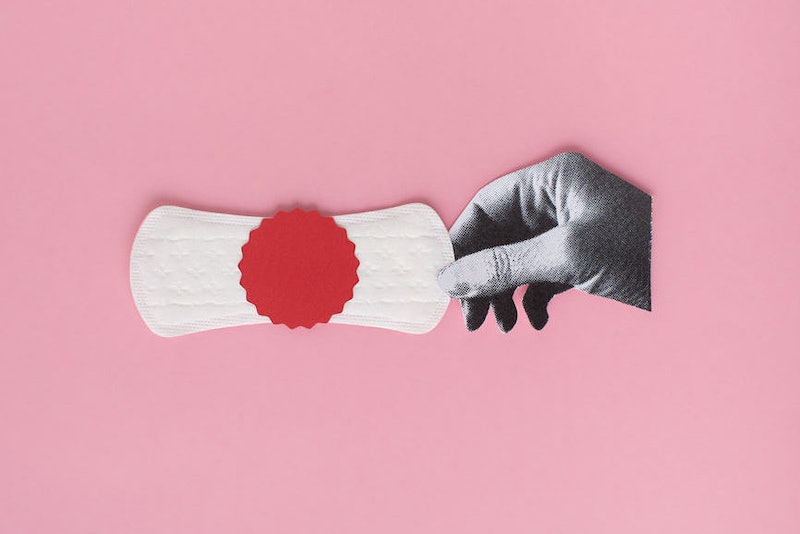 If you’ve ever seen a TV advert for sanitary products, you might have noticed that there's a big elephant in the room — menstrual blood. Instead of depicting it, brands tend to opt for smiling people playing sport or cycling around in white trousers, just to prove how totally great and wonderful periods can be. Then somewhere sandwiched in the advert, a blue gel is used to demonstrate how absorbent their product is. The fact that audiences are not used to seeing menstrual blood on screens means advertisers trying to destigmatise periods are being met with backlash. Australian sanitary product brand Libra received complaints for showing menstrual blood in their most recent advert aiming to normalise blood.

As The Guardian reports, a TV watchdog received hundreds of complaints when the advert first appeared on Australian TV. This came two years after a similar advert by sibling company Bodyform was aired in the UK.

The commercial shows different people in scenarios like in bed, kissing, making art, swimming, and sitting in a library. Amongst the scenes there is one showing a person’s legs in the shower with menstrual blood dripping down them, and another with white knickers which are red in the groin area.

The Australian Advertising Standards Board dismissed complaints, saying in a statement given to the Guardian: “The panel considered that the depiction of blood in the context of an advertisement for feminine hygiene products is not against prevailing community standards on health.”

“The panel noted that the depiction is an accurate presentation of a real physical occurrence.”

Although some of the complaints suggested it wasn't okay for children to view this (even though some children have periods), claiming it is graphic content, the report deemed the use of blood as “not inappropriate.” It said: “The panel noted that although some members of the community would prefer not to see bodily fluids displayed on television, it was not a depiction which could be found to breach the code and its depiction in an advertisement which would be viewed by a broad audience including children is not inappropriate,”

In the Libra ad, a message also pops up saying, “thanks for the email, I have a very heavy period so will be working from home today.” Unlike other period adverts that pass menstruation off something which is easily manageable for everyone and shouldn't get in the way of life, Libra illustrates how for some, periods induce chronic unbearable pain. For people living with endometriosis or severe premenstrual syndrome, for example, periods can be debilitating.

Bodyform and Libra aren't the only companies trying to make their adverts more representative of people's lived experiences. Razor company Billie was praised recently for creating the first ad campaign which actually showed body hair. Like the use of blue gel to replace menstrual blood, razor adverts which don’t show any body hair to begin with are equally nonsensical. Having a person grinning on the edge of a bathtub shaving an already waxed leg defeats the point of a razor.

If stigma against periods and people who have them is to ever end, then it's time for more sanitary companies to wake up and start normalising red menstrual blood. In fact as it doesn't actually delve into the ins and out of menstrual blood, I think the Libra advert is even being polite. Adults and children alike have always had periods and will continue to have them. Whether these adverts are now coming out because of the phenomenon of femvertising, or a genuine concern to end shame around it, destigmatising bodily functions can only be a good thing.

More like this
Pret & Costa’s Coffee Is The Strongest On The High Street, According To Which?
By Sam Ramsden
Here’s What TikTok's "Mascara” Trend Is *Really* About
By El Hunt
Ben & Jerry’s New Sundae Flavours Are A Chocoholic’s Dream
By Sophie McEvoy
90 Epic Truth Or Drink Questions To Play 'Say It Or Shot It' With
By Bustle UK
Get The Very Best Of Bustle/UK
Sign up for Bustle UK's twice-weekly newsletter, featuring the latest must-watch TV, moving personal stories, and expert advice on the hottest viral buys.