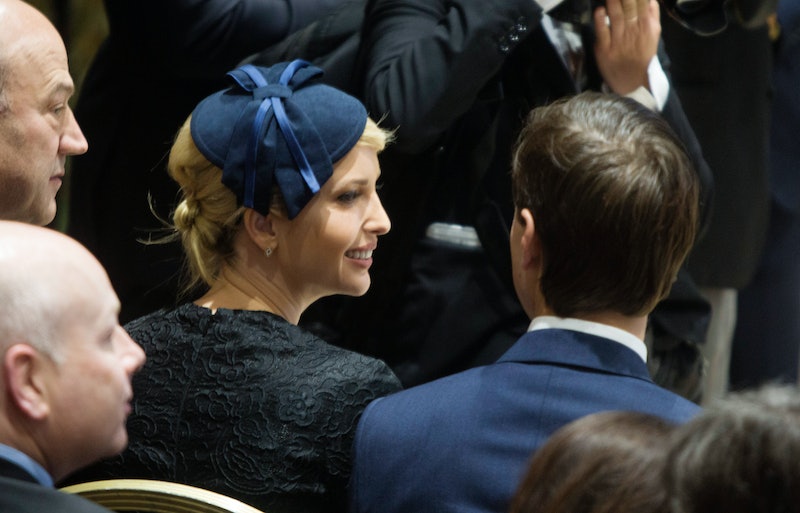 The administration as a whole is toxic to the feminist movement, but Ivanka Trump may well be the one person we should fear most. As first daughter, assistant to the president, and "empowered female icon," Ivanka might be the most dangerous thing to feminists this year, and it's not just because she helped propel her father, who's made numerous misogynistic comments, to the presidency. It's because she's the faux-feminist veneer behind which the Trump administration is hiding.

Ivanka is one of her father's top advisors, and reports liken her to the "president whisperer." She's working quietly behind the scenes, she says, but none of the issues that she claims to be advocating for seem to be finding a place in any of her father's policy. She tweets in support of equal pay while her father rolls back protection for women in the workplace. A proposal for paid maternity leave made it into her father's budget, but it seems highly unlikely that anything resembling that will pass Congress. Her efforts, to the extent that they exist, are getting stymied at every turn by an administration that she puts her public support behind.

And as long as she continues propping up this anti-woman government, Ivanka Trump is setting feminism back. She hasn't stood up for abortion rights, nor has she supported Planned Parenthood publicly (once she even suggested to the organization that it break off its abortion services into a separate entity). Her thoughts about equal pay evidently had no effect on how her father acted. Her proposed family leave policy reinforces traditional gender roles by offering only maternity leave, as though a father staying at home with a child wasn't even worth considering.

Ivanka hasn't actually said that she's a feminist, but she's certainly been claiming the girl power vibe, starting with her speech at the Republican National Convention last year and leading all the way up to her ostentatiously frivolous book, Women Who Work. The book, which offers no real solutions to the problems non-heiresses face in the working world, is an excellent compendium of her brand of feminism as a whole — light on policy, heavy on images of Ivanka herself as the perfect model of a working woman.

As Annalisa Quinn put in an NPR review, Women Who Work "is a sea of blandities ... Reading it feels like eating scented cotton balls." Jennifer Senior at the New York Times puts it another way: "The book is not really offensive so much as witlessly derivative, endlessly recapitulating the wisdom of other, canonical self-help and business books."

Reviewers have panned the book for ignoring the deeper, structural challenges that women are up against, instead offering what Senior refers to as "personal-best and attagirl bromides." Rather than aiming to change an inherently patriarchal system, Trump's feminism has "less to do with structural change than individual fulfillment and accessorizing properly," as Senior puts it. Or, according to Michelle Goldberg in Slate, "this is not a book about policy or about navigating the minefield of male-dominated corporate culture. Much of it is a celebration of the unlimited possibilities open to working women when they have full-time household help."

Ivanka touts this go-get-'em vibe in her book, implicitly suggesting that that is all women need. Passion, she writes, is "more important than education or experience in achieving your version of success" (which may apply to her elevation to the White House, but tell that to all the millennials with masters degrees who are grossly underemployed). But Ivanka got to where she is — the owner of her own company, an assistant to the president — with only a bachelor's degree and her natural drive, so why shouldn't anyone else?

The reviews of her book largely touch on one similar point: While she's offering her advice to working women, she fails to acknowledge the dose of privilege on the silver spoon in her mouth. As Emily Peck writes for HuffPost, Ivanka gives a brief shoutout to the opportunities afforded to her by her family name, but "she fails to wrestle with how her family’s wealth and status allowed all her hard work to pay off."

Ivanka writes that she didn't have time for self-care, like massages, during the campaign, but what about the women who can't afford to have that option? Sure, a massage is nice, but what women really need is equal pay, full reproductive rights, and advocates who will fight for them.

While she claims to be working for women, in reality she's burrowing herself deeper into an extraordinarily misogynist administration and, in doing so, giving them a shield against which to fend off accusations of sexism. A Trump, Steve Bannon, and Mike Pence trifecta in the White House is terrifying enough, but it's even worse when Ivanka is there to tout their work as good for women.

As in her book, it's all about perception. Forget the real injustices that women face and the Trump administration policies that would exacerbate them, and focus on her instead. Ivanka's brand of female empowerment is like a life raft with a gaping hole in it — feminists would be wise not to get on board.