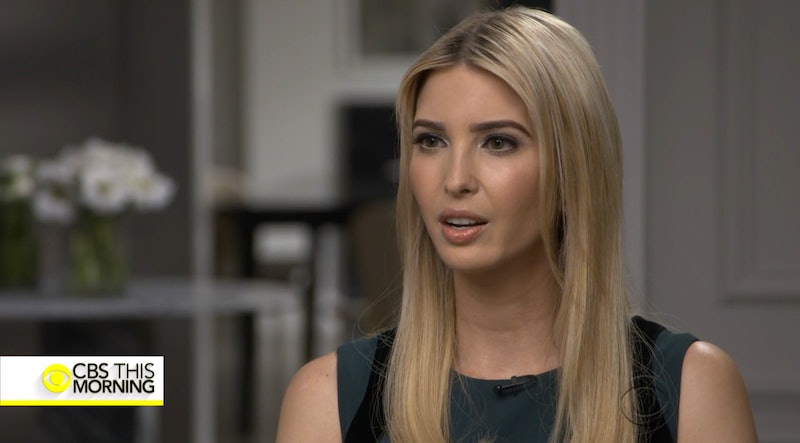 Donald Trump's daughter is noticeably better with words than he is, but she doesn't really use her voice enough in public for people to see this very often. In an interview with CBS airing on Wednesday, Ivanka Trump addressed critics who call her "complicit" — but her response is hardly enough. She claimed that her public silence doesn't reflect her private advocacy — but the problem is that having her father's ear isn't enough. If she really believes in causes like equal pay and paid parental leave and she wants to make them into a reality, then she needs to use her position not only to work privately, but also push for them loudly and publicly.

In the interview, CBS' Gayle King asked Ivanka to respond to critics saying that she shouldn't be silent on issues like the administration's treatment of Planned Parenthood, gay rights, and climate change. Ivanka, who has at times used Democratic talking points to much Republican applause (remember her RNC speech?), has made no public remarks on these issues. Her response to the question, though, would seem to suggest that she doesn't agree with her father on all of them.

"I would say not to conflate lack of public denouncement with silence," Ivanka told King, adding that her form of protest is to privately address her father about the issues on which she disagrees with him. "Where I disagree with my father, he knows it, and I express myself with total candor," she went on to say.

As an explanation, this is full of problems. While she has made numerous public statements about equal pay and paid maternity leave, her father has made no moves to try and turn those concepts into policy. When it comes to equal pay, President Trump has actually gone backward by rescinding an executive order of President Obama's that guaranteed certain protections for women. If Ivanka disagrees with her father on that front, she needs to do more than just talk to him privately and blithely tweet about it.

The same goes for the other issues mentioned above, especially Planned Parenthood. If she is to be an advocate for women's empowerment in a White House that sorely needs it, then her advocacy should extend to the vulnerable women and not just the privileged ones.

Ivanka may be reveling in her new position, but she hasn't fully grasped all of its power. As a member of the Trump White House, she is now a powerful political figure — not because of her official job title, because that doesn't really give America too much information about what she'll actually be doing.

What Ivanka has, though, is her voice; as long as she's silent about these issues in the public sphere, it is reasonable to assume that she agrees with her father.

Ivanka needs to realize that she doesn't just have her father's ear. There are also millions of conservatives, men and women, who fully support her ascendency to the White House. If she were to speak out against the administration's attempts to shut down Planned Parenthood, for example, she might actually be able to get through to people who would never pay attention to the same point made by a liberal.

Ivanka says that she wants to be "a force for good" — but so far, the force aspect of that is missing. If she really wants to shed the label of "complicit", then she needs to figure out a way to find that force, and harness it.