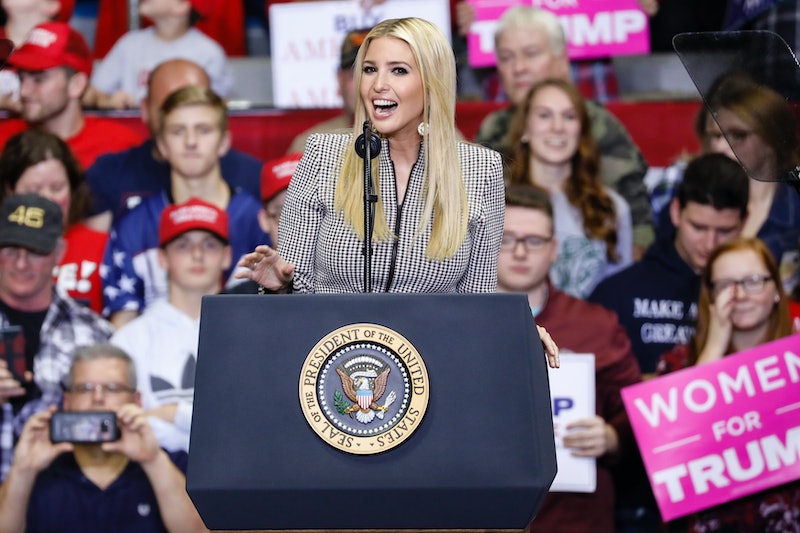 At a campaign rally Monday night, Ivanka Trump, Sarah Sanders, and Kellyanne Conway joined Trump in a rare trio appearance for a MAGA event. The rally, which was in Indiana on behalf of Senate candidate Mike Braun, seemed to reflect how much effort the Trump administration is putting into rallying its voter base for the midterms. After all, Ivanka, Sanders, and Conway have proven to be hugely popular on the campaign trail this fall.

It started with Ivanka, who actually attended two rallies for POTUS on Monday, the day before midterms. While in Ohio, Trump first invited her onto the stage with his now-standard reference to her beauty, although the context was a bit different this time around. Trump said,

Now I don’t know if they’ll say this is nepotism...But the truth is she’s a very, very—you're not allowed to use the word beautiful anymore when you talk about women, you’re not allowed, no, no, it's politically incorrect.

Trump continued, "I’m not allowed to say, because it’s my daughter Ivanka, but she’s really smart. And she’s here, shall I bring her up?”

While at the podium, Ivanka noted that it had never been a "better time to be an American worker."

POTUS then brought Sanders and Conway up to the podium together. To immense cheers, Sanders spoke first. “You’ll have to forgive Kellyanne and I, we’re maybe a little speechless. We’re not used to friendly crowds."

Sanders then went on to say that her greatest job in her life is that of a mother. She added, "And that’s why I work for this president, because I care about my kids’ future and I care about the future of our country and I want someone who I know will protect their future.”

Next, Conway went for a more direct speech about the Senate race they were all there for, claiming that she was there in a "personal capacity" in support of Braun, and in direct opposition to Democratic challenger Joe Donnelly. "Let me just say in my personal capacity, because this election is very personal to me, Joe must go," she said. "Get him out."

Immediately following the rally, there was speculation about the ethical questionability of Sanders and Conway appearing at an event. In general, political staffers of an administration are legally forbidden from participating in partisan activities in a public manner.

But Walter Shaub, a former head of the Office of Government ethics, cleared the record in a tweet. He wrote, "Lots of folks are tagging me in tweets asking if WH staff can speak at campaign rallies. The answer is yes. What they can’t do is use their govt titles (e.g., 'Assistant to the President' or 'Press Secretary')." This is likely why Sanders and Conway were both careful to emphasize why they were there as individuals, rather than politicians.

Politico notes that some of the most controversial Trump officials have become the "hottest gets" for midterm campaigns and rallies. Kentucky Republican strategist Scott Jennings explained to Politico, “Republicans love the most visible people who are constantly doing battle with the people they hate the most, which is the media."

And yes, the three most requested Trump officials from GOP candidates on the campaign trail are Ivanka, Conway, and Sanders, per Politico.