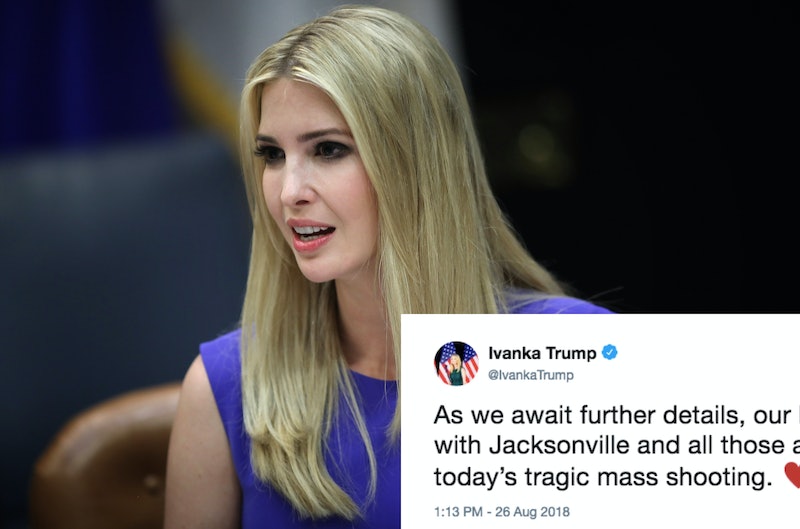 On Sunday, a fatal mass shooting interrupted a Florida gaming competition, and almost immediately, responses to the event poured in via Twitter. Among those tweeting responses to the Jacksonville shooting was Ivanka Trump, presidential advisor and first daughter.

"As we await further details, our hearts are with Jacksonville and all those affected by today’s tragic mass shooting," Ivanka tweeted Sunday afternoon, including a heart emoji at the end of her message.

President Donald Trump was briefed on the shooting by 4 p.m., according to CNN, and Ivanka Trump was the first member of the first family to publicly respond to the news.

The Jacksonville Sheriff's Office did not immediately share a fatality count, though it said that the shooter killed multiple people.

Ivanka Trump's statement on Sunday was pretty similar to how she generally responds to mass shootings. Generally, she offers condolences, prayers, and thoughts to those affected. Back in February, after the Parkland shooting, for example, Trump tweeted that she was "praying for the innocent lives lost, their families and the Parkland, Florida community in the wake of today's unspeakable tragedy."

"Your dad could do something about guns, but he won’t," one Twitter user responded.

Responding with criticism about President Trump's gun control policies was a common refrain.

"The Trump administration is doing absolutely nothing to prevent these tragedies," wrote another. "POTUS is too focused on his scandals to bother worrying about anything else."

Ivanka Trump was one of many high profile figures to respond to Sunday's shooting. Florida Sen. Marco Rubio tweeted about the event, describing it as "horrifying news."

"Horrifying news from #Jacksonville this afternoon," Rubio wrote. "Have spoken to local authorities [and] am still awaiting more information on this shooting. Situation still unfolding, law enforcement is asking everyone to avoid the area. #Sayfie."

Other politicians used the tragedy as an opportunity to pivot toward gun control discussions.

"My thoughts are with everyone impacted by the shooting today at the Jacksonville Landing — but thoughts are not enough," tweeted House minority leader Rep. Nancy Pelosi. "As we continue to track developments, it’s clear Congress must stop stalling [and] act to protect Americans from the daily tragedy of gun violence. #NeverAgain."

Senate minority leader Sen. Chuck Schumer also tweeted a response. "As we await more details on the shooting in Jacksonville, my heart aches for the victims, their families and loved ones," he wrote. "Thank you to first responders and law enforcement for their swift response."

Mass shootings virtually always produce conversations about gun control, as well as a debate about the "right time" to have such discussions. Ivanka Trump's statement, as well as its responses, by and large adhered to the norm.