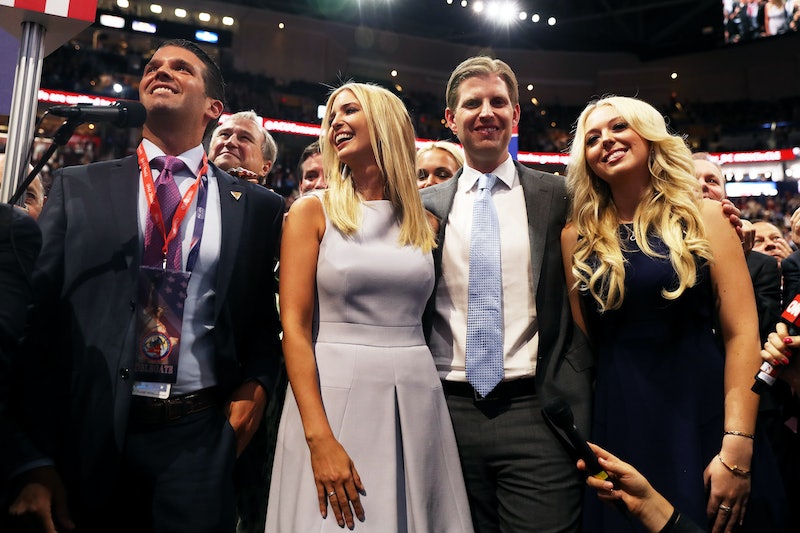 Sunday marked Eric Trump's 35th birthday, and many friends and supporters took the opportunity to celebrate his day on social media. Ivanka Trump's birthday message to Eric Trump certainly did this, and it included a throwback photo with both of her brothers.

"Happy birthday @EricTrump," Ivanka tweeted. "I hope that this year is your best turn yet around the [sun] ! xx."

Eric is the president's third son, as well as his third child with Ivana Trump. He grew up with his elder two siblings, based out of New York City, where the Trump Organization is headquartered.

The photo Ivanka shared showed her, Eric, and Donald Trump Jr. cozied up on brightly-colored striped couch. Ivanka and Eric are grinning widely for the camera, even while Trump Jr. appears to hold Eric in a headlock. All three appear to have been very young when the photo was taken.

Although customary for members of the Trump family to share birthday wishes across social media platforms, by late Sunday afternoon, Ivanka appeared to be the only member, aside from Eric's wife, to publicly extend celebratory wishes to the third Trump child.

Like Trump Jr., Eric works with the eponymous family brand, currently serving alongside his elder brother as a trustee for the Trump Organization. The pair began running the company after their father assumed office in Washington.

The Republican Party, however, was among those to wish Eric a happy birthday on Twitter. "Happy birthday, @EricTrump!," the GOP account tweeted on Sunday. "With your help, we are truly Making America Great Again!"

The party did attempt to put together a birthday card for Eric, but as reported by Time and The Cut, the effort received considerable pushback from many Twitter users. A lot of those who took issue with the initiative pointed to the fact that Eric, who does not hold any position in the Trump administration, is a private citizen.

Still, however, several other associates and fans did send out messages of their own. By and large, they were simple and to the point.

For her part, Eric's wife, Lara Trump, posted a series of photos on Instagram to mark the festive occasion. Images included several photos of Eric with their son and dogs, as well as of the couple smiling together. "HAPPY 35th BIRTHDAY @erictrump!!!!" she captioned the photo set. "We all love you so much!"

As for the rest of the Trump family, whether or not they will publicly acknowledge each other's birthdays can be difficult to predict. For the last two years, for example, the president has declined to tweet about Tiffany Trump's birthday. Whether this is intentional or not is entirely unclear.

Additionally, whether or not any member of the family posts birthday wishes to any other member of the family could very well be dependent on a variety of factors, including — as is the case for just about any other person with a Twitter account — how relatively busy they are with their own lives. It also doesn't mean that anyone's birthday was ignored all together — birthdays can be celebrated offline, too.