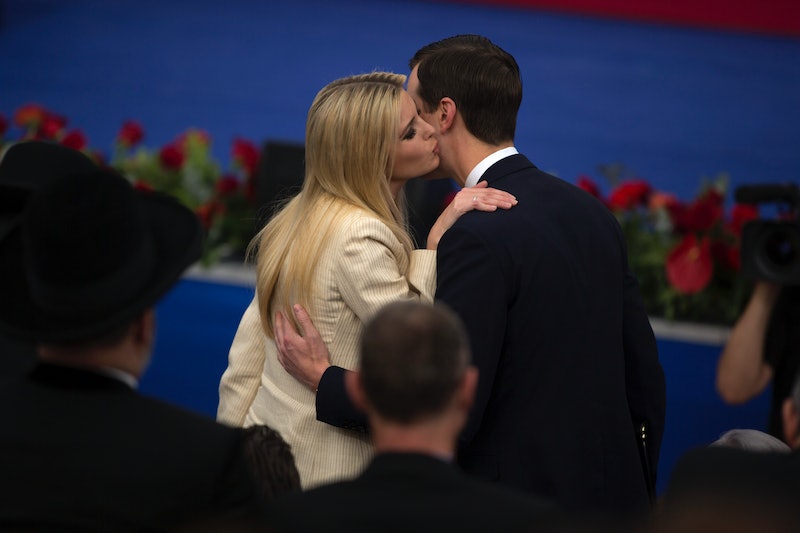 Thursday marked Jared Kushner's 38th birthday, and you know what that means: It was time for the first daughter's requisite sentimental tweet in his honor. This year, Ivanka Trump's birthday message to Kushner was short but sweet, calling him the "love of my life."

On both Twitter and Instagram, Trump shared what seems to be a newly-publicized photo, based on back-searching the image on Google. It shows the couple outdoors wearing formal attire — Kushner in a tuxedo and Trump in a deep purple gown with a square neckline. "Wishing my best friend and the ❤️of my life a very happy birthday!" Trump captioned the photo. That's a pretty on-brand message; her birthday tweets to Kushner tend to be succinct and label him her "best friend."

It's not yet clear how the couple will celebrate Kushner's birthday (last year they held some festivities at home, including his kids treating him to a "Happy Birthday" serenade). But they may have already had the chance to celebrate on their recent trip to Florida. Yahoo! News reports that Kushner and his family traveled to Mar-a-Lago for the holidays. They received some criticism for vacationing while the government remained shutdown and 800,000 federal workers were going without pay.

Kushner isn't in the spotlight quite as much now as he was around his birthday last year (Trump's birthday tweet then received a lot of hate). At that time, it was being reported that he was under increasing scrutiny from the Mueller investigation, and Michael Wolff's book Fire and Fury: Inside the Trump White House had just been released with some unflattering comments about Kushner.

Wolff quoted Steve Bannon claiming Kushner had engaged in money laundering and saying Robert Mueller's "path to f**ing Trump goes right through ... Jared Kushner." Bannon reportedly continued: "It goes through Deutsche Bank and all the Kushner sh*t. The Kushner sh*t is greasy. They're going to go right through that."

Now it's a year later, and — although Kushner isn't entirely out of hot water when it comes to the Mueller probe — the nation's attention seems to have shifted elsewhere. In fact, both he and his wife have reportedly tried to stay a bit more in the shadows of the Trump administration in recent months. The New York Times reports that his relationship with the president has disintegrated somewhat and that President Donald Trump doesn't refer his aides to Kushner as much as he used to.

The president has even reportedly made fun of his son-in-law behind his back. According to The Times, POTUS has joked that he "could have had Tom Brady" in the family, but "instead, I got Jared Kushner." Ivana Trump claimed in her 2017 memoir that her ex-husband tried to get their daughter to date Brady.

Kushner and Trump will celebrate their 10-year wedding anniversary this fall. The couple has three children together and currently lives in Washington D.C., where they moved from New York City. Trump is about 10 months younger than her husband and won't turn 38 until October.