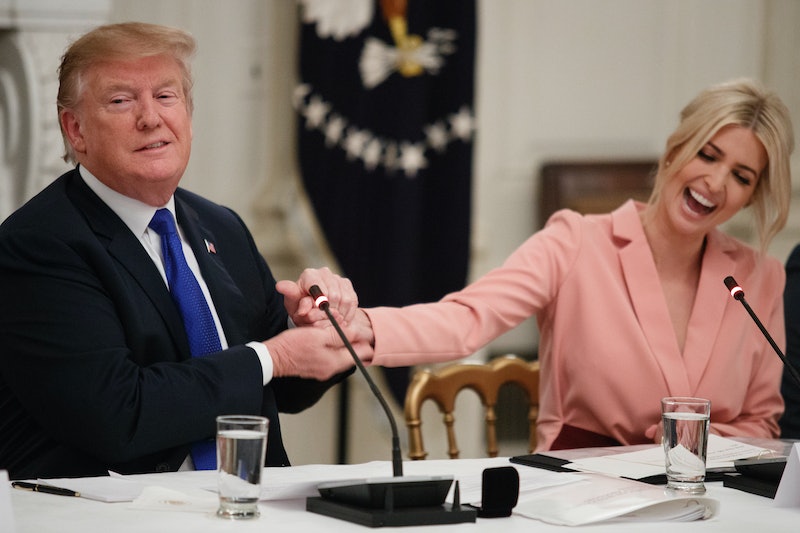 Although it's only been just over a month since President Donald Trump ended the second government shutdown spurred over his demand for border wall funding, much of Washington's attention has already turned toward the president's 2020 budget proposal. While Trump's congressional budget proposal is expected to include a number of drastic cuts, it's not all about slashing spending. According to NPR, Trump's budget will include a child care proposal Ivanka Trump helped develop.

The president's 2020 budget proposal will reportedly include plans to increase federal spending on child care as well as funding for a new child care initiative designed to encourage employers to investment in child care, NPR was the first to report. According to the news outlet, Trump's budget proposal will seek $5.3 billion to fund the Child Care and Development Block Grant program as well as an additional one-time investment of $1 billion to the program.

That $1 billion investment would be used to increase child care in underserved populations. According to NPR, states that apply and receive funding under the initiative could then use it to either encourage private sector employers' investments in child care or to support child care providers that cater to parents who are in school or who work non-traditional hours.

Under Ivanka, the Trump administration has begun to discuss the lack of access to affordable child care as a barrier to economic growth. "An important barrier to bringing more adults off the sidelines [and into the workforce], especially women, may be the high cost of engaging others to provide child care," a White House article on work and the cost of child care released in late February read. "Policies that reduce this cost of child care could bring more Americans into the workforce, increasing opportunities for families and ensuring that our current strong economic growth is sustained into the future."

The Child Care and Development Block Grant program was established via welfare reform in 1996 in an effort to assist extremely low-income parents to afford child care. For too long, however, the program appeared to be underfunded, with the New York Times reporting in 2017 that only one out of every 10 eligible children actually received benefits from it. Funding to the program was then increased in 2018.

Of course, it's too soon to say if Ivanka's child care spending proposal will make it to the final 2020 budget. Congressional Democrats have already panned a number of aspects of Trump's budget proposal. Budget Committee Chairman Rep. John Yarmuth, for example, told The Washington Post the proposal was "clearly ... a nonstarter in the House" and that House Democrats were "obviously ... going to disregard it."

That being said, many Democrats have been known to advocate for increased access to child care. In fact, as NPR pointed out, Democratic 2020 presidential candidate Sen. Elizabeth Warren recently proposed a child care for all system that would provide government-subsidized care to parents using a sliding scale based on ability to pay. What's more, Congress allocated $5.3 billion for the Child Care and Development Block Grant program in its 2019 budget, meaning Ivanka's proposal for increased child care spending may find enough bipartisan support to make it to the final budget.