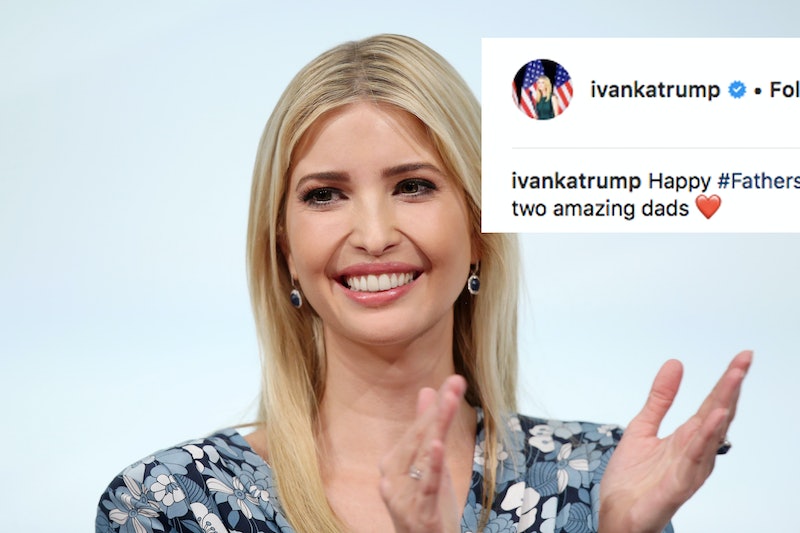 The first daughter's Twitter and Instagram posts about her family have become a lightning rod for criticism of the Trump administration's policies — and her social media this Father's Day was no different. Ivanka Trump's Father's Day Instagram post followed the same pattern: She praised her family, while critics called her tone deaf.

"Happy #FathersDay to these two amazing dads," Trump wrote on her Instagram with a heart emoji. She posted a photo of her husband Jared Kushner giving her dad a high five as she looks on approvingly. The photo had received more than 60,000 likes as of Sunday morning and a growing number of comments.

But her critics didn't hold back. "Shame," wrote user @lisagabrieletv. "So much shame on all of you, inflicting trauma on families while yours pilfers the nation. Your followers are equally culpable."

Another Instagram user, @jrevchrisroscoe, wrote "Amazing Father’s [sic] do not rip children away from their mothers and fathers. You are a disgrace."

Most of the criticism centered around the Trump administration policy to take immigrant children away from their parents at the border. On Friday the Associated Press reported that from mid April to the end of May alone, some 2,000 kids had been taken from their parents.

This line of attack began after a Twitter post at the end of May. Trump uploaded a picture holding her son just as news came out that migrant moms were having their kids forcibly taken from theirs by Border Control.

"This is so unbelievably tone deaf, given that public outrage is growing over young kids being forcibly ripped from the arms of their parents at the border — a barbaric policy that Ivanka Trump is complicit in supporting," Washington Post columnist Brian Klass wrote on Twitter in response.

Since then the criticism hasn't let up. Trump posted a photo of a "date night" with her daughter on Friday, the same day that the AP reported on the number of kids who had been taken. MSNBC's Mika Brzezinksi called it "more than tone deaf."

“This is a story about mothers and their vital roles as mothers,” Brzezinski said on Morning Joe. “When you have babies being taken away from their mothers, you have to ask why the counselor to the president, who was brought in to help the president perhaps create good policies surrounding women, parental leave and domestic policies, is so tone deaf to post a picture about her special day with her daughter.”

Trump responded to the criticism on social media with a chain of Twitter posts quoting a Roman emperor's writings. " She summarized his thoughts: "Focus on what is before you, on what you can control and ignore the trolls!" Trump wrote.

Trump has had to take her own advice ever since, especially in posts with a clear tie to family. On Thursday, Trump posted a picture of her as a kid with her dad for the president's birthday. It also drew comments on the new, harsh immigration policy.

"As a fellow mother, I beg you to do your part to end the horrific separation of young children (including infants and toddlers) from their parents seeking asylum," wrote user @whatthedillyo. "You have the power to affect change and save these children from even more tragedy than they have already faced in their short lives."

On her Father's Day Instagram post, there were others who defended her and her father — as well as the administration's policies. But most heaped praise on the Trumps without entering the immigration policy debate. "Thank you for sharing these two brilliant and loving men with the nation!" wrote user @sallmcca with several U.S. flag emojis. "We appreciate them too!"