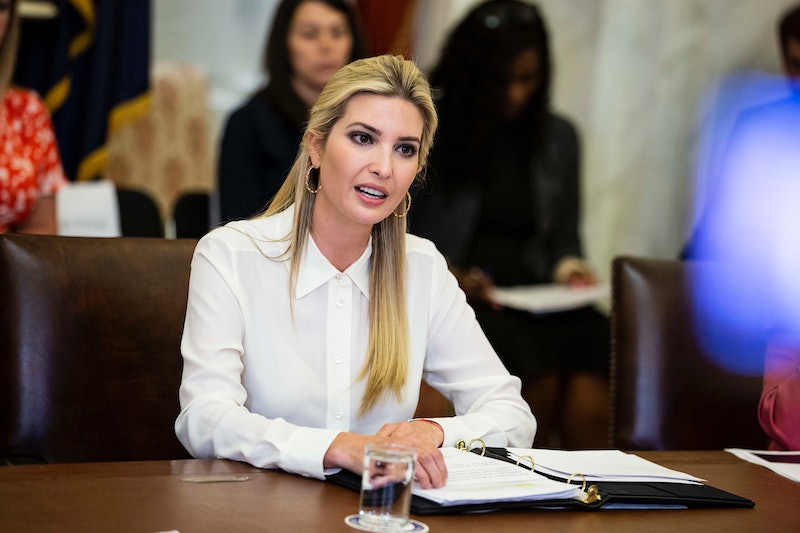 On Tuesday, the White House released a comprehensive new strategy to increase women's involvement in peace-building and conflict resolution — and the president's daughter reportedly played a key role in helping it come to fruition. Ivanka Trump championed the women, peace, and security strategy as part of her role as advisor to the president, the Wall Street Journal reported. Her portfolio for this role includes work on policies that protect and promote the rights of women and girls, the paper added.

The United States Strategy on Women, Peace, and Security is a government-wide policy that "focuses both on increasing women’s participation in political, civic, and security endeavors to prevent and resolve conflicts and on creating conditions for long-term peace around the world," per a White House press release. The strategy mandates that federal agencies that work on international matters take measures to increase women's involvement in post-conflict peace processes and post-disaster relief efforts.

The paper added that Ivanka has played an important role in moving the strategy forward, and she participated in a recent discussion about the new initiative at the Capitol. The roundtable discussion was hosted by Republican Sens. Jim Risch and Shelley Moore Capito and Democratic Sen. Jeanne Shaheen, the Senate Foreign Relations Committee indicated on its website.

In a statement shared on the committee's website, Ivanka reflected on the significance of the new strategy, emphasizing that ensuring women's equality and increasing their involvement in conflict resolution is crucial to building long-lasting peace around the world. "... Today's comprehensive, all-of-government WPS Strategy ... recognizes that women's participation and empowerment are essential to good defense policy, conflict resolution and post-conflict peace building efforts," Ivanka said, per the committee.

The committee noted that the United States Strategy on Women, Peace, and Security was designed to implement the tenets of the 2017 Women, Peace, and Security Act, which was sponsored by Shaheen and Capito. The act mandated that the U.S. government take a large-scale approach to ensuring that women are more readily included in international peace-building processes. The strategy unveiled this week details this approach.

Both the new strategy and the 2017 act are centered around the idea that including women in peace-building work abroad means that this work is more likely to be successful. Notably, according to Rachel B. Vogelstein and Jamille Bigio of the Council on Foreign Relations, "The participation of women and civil society groups in a peace negotiation makes the resulting agreement 64 percent less likely to fail and 35 percent more likely to last at least fifteen years."

The authors also added that "women’s inclusion in peacekeeping units, police forces, and the security sector improves accountability and decreases abuses against civilians."

Because of the linkages between women's involvement in peace-building and long-term conflict resolution, there have been many policy pushes in the United States — and beyond — to achieve this aim. For example, the U.S. government developed National Action Plans on women, peace, and security in 2011 and 2016 to address how it will carry out United Nations resolutions on women, peace, and security issues, PeaceWomen noted.

Now, the newly launched National Strategy on Women, Peace, and Security represents that latest initiative intended to bolster women's roles in peace-building processes. As federal agencies begin to carry out the strategy's requirements, it remains to be seen whether Ivanka will continue to be involved in ensuring that its guidelines are met.