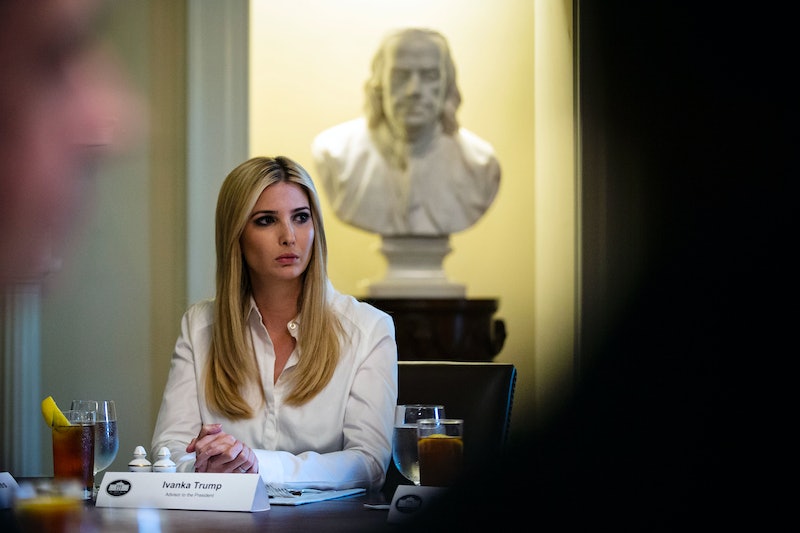 On Wednesday first daughter and presidential adviser Ivanka Trump's campaign for paid family leave was taken up a notch when she met with lawmakers to discuss ways to approach the issue. Above all else, she has reportedly prioritized that the ultimate solution be supported by both Democrats and Republicans.

"I look forward continuing to work with lawmakers as we take next steps in this important bipartisan effort to deliver on one of the president’s campaign promises and executive priorities, and sign a paid family leave policy into law," she said in a statement to the Washington Examiner. "This legislation is long overdue."

The meeting coincided with an op-ed that Ivanka published in Fox News on the same day.

"Without debating the value and merits (of which there are many) of paid leave legislation supported by members of the Republican and Democratic parties, we must recognize their failure to gain majority consensus within or across party lines," Ivanka wrote. "Hence, our focus must turn to policy ideas that can secure congressional approval."

As Ivanka pointed out in her piece, that conservatives are coming to the table to discuss paid family leave is significant, because it has long been considered a more Democratic-oriented issue.

"In September 2016, when then-Republican presidential primary candidate Donald J. Trump called for a national paid family leave plan, pundits called it 'a striking departure from GOP orthodoxy,'" she wrote. "Indeed it was. But over the past 21 months, we have witnessed conservatives building a majority in support of this important policy."

Although there is bipartisan support for a national paid family leave program, there's less consensus regarding how best to financial approach it. Much buzz surrounds a proposal that Sen. Marco Rubio is expected to introduce, which reports suggest will be similar to a proposal put forward by the conservative Independent Women's Forum.

According to The Hill, their idea would allow new parents to tap into their Social Security benefits early, and would require them to postpone their eventual retirement based on how much of their benefits they used to cover their family leave.

The American Action Forum (AAF) reports that paid family leave plans that tap Social Security benefits to cover their costs could prove economically detrimental, particularly since the Social Security Trust Fund is slated to run out of money by 2034. In a study published on July 9, 2018, the Forum reported that a paid family leave program relying on Social Security could cause the fund to be depleted six months earlier than previously anticipated. Notably, the AAF describes itself as leading "center-right policy debate."

Though Ivanka has made promoting paid family leave one of her priorities, Politico reports that she doesn't intend to endorse Rubio's plan unless there eventually appears to be larger congressional support for it in the long run. Politico reports that Ivanka is more concerned with convincing Republicans to support paid family leave at all than she is with promoting the nitty gritty details of any proposal.

Ivanka has been promoting paid family leave intermittently since the 2016 presidential election. "As a mother myself, of three young children, I know how hard it is to work while raising a family," she said at the Republican National Convention at the time. "And I also know that I'm far more fortunate than most. American families need relief. Policies that allow women with children to thrive should not be novelties, they should be the norm."

Whether or not Ivanka will ever support specific paid family leave proposals remains to be seen. For the time being, it seems, she is just promoting the idea itself.