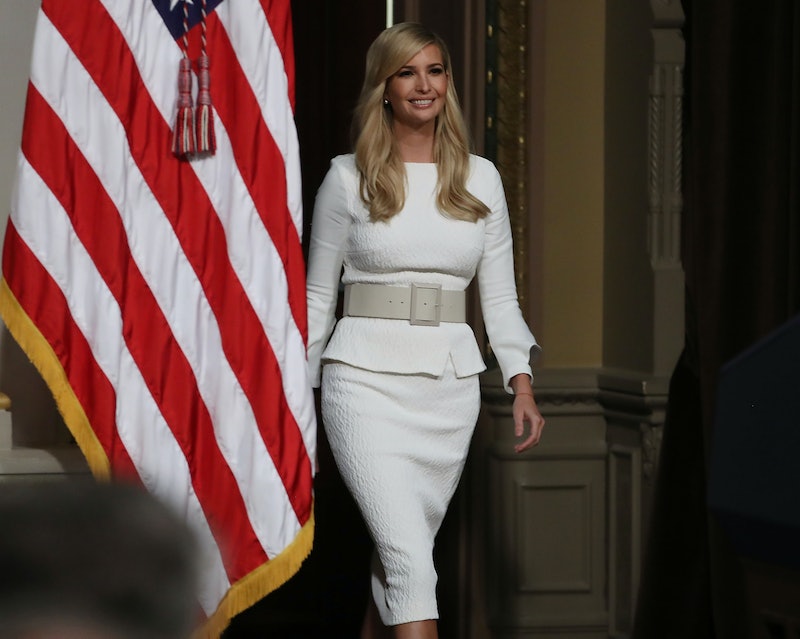 In the run-up to the midterm elections, Ivanka Trump stayed fairly quiet on the subject. If you were just looking at her social media feeds, you never would have know that there was an election going on. Now, though, you can read Ivanka Trump's response to the 2018 midterm results, and it's really only clear that she's not taking a partisan tone in looking at what happened.

Back in August, The Washington Post reported that Ivanka was likely to be a midterms campaign mainstay, particularly in the suburban districts where strategists see her as the biggest asset that the Trump team has. She's an extremely popular Trump surrogate, along with other divisive figures from the White House, like Sarah Huckabee Sanders or Kellyanne Conway, as Politico wrote. As the first daughter, of course, she commands another level of attention — and in many cases adoration — from the president's fans.

Ivanka's low profile in the months before the election, then, was surprising to many observers, as Glamour wrote. Like during the 2016 campaign, she was expected to play a role in attracting women to vote for the Republican party. Now, it appears as though staying out of the spotlight might have been a mistake.

Both the Democratic and Republican parties saw successes and failures on Tuesday night, with the Democrats taking the House, the Republicans holding the Senate, and the Democrats flipping seven major governorships. The reactions on both sides have also been mixed, with both Democrats and Trump celebrating their victories to varying degrees, according to ABC News.

Judging by her Twitter reaction to the 2018 midterm results, Ivanka seems to be recognizing both sides. Instead of celebrating the GOP victory in the Senate, her Twitter message recognized something else to celebrate: America.

"Both political parties got good news yesterday, but the real winner was America. With record turnout and sky-high participation, we saw an engaged, plugged-in democratic process at work," Ivanka tweeted on Wednesday morning. "Today, it's time to come together as Americans and work toward solutions that benefit all!"

While members of both parties and politics observers will likely be debating the question of whether both parties "got good news" for months, Ivanka does appear to be correct when it comes to voter turnout. It will take a while before the verified voter numbers come in, but for now, The New York Times estimated that about 114 million people cast ballots this year, a number that, as statistics guru Nate Cohn put it, "shattered" the turnout rate of 83 million in 2014. And as Vox explained, the high level of enthusiasm for this year's midterms, which Ivanka alluded to in her tweet, does seem to have created "sky-high participation" and "an engaged, plugged-in democratic process."

Part of this voter engagement, though, had to take place in order to fight Republican voter suppression in numerous states — something that Ivanka, unsurprisingly, did not mention in her call for unification. She also took a different tone from her father, who reacted to Democrats' victory in the House by immediately threatening to investigate them if they began investigating him. Ivanka's public role, though, has always been to present a softer face of her family and the administration — and that's definitely the tactic she took on Wednesday.