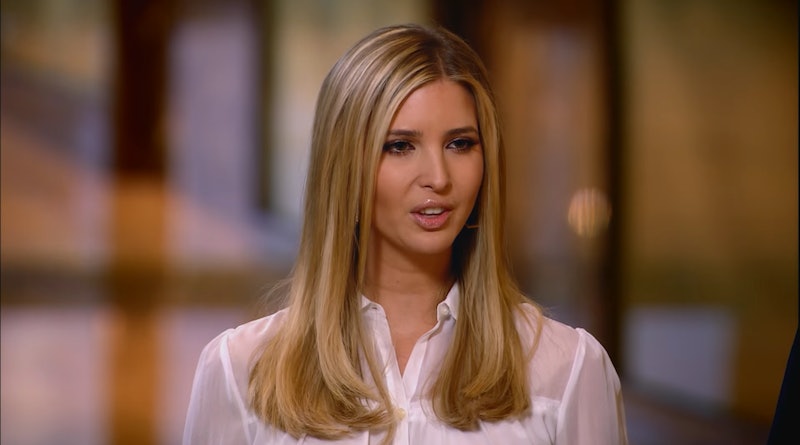 The president's reality show background — and the larger than life qualities it has given his time in office — has been a topic of conversation since the beginning of the 2016 election cycle. But less talked about is the publicity launching pad it gave his daughter. Ivanka Trump's role on The Apprentice was bigger than you might remember.

If you've never watched the show, The Apprentice is a reality program that started in the early 2000s, and was essentially based on Donald Trump's life as a real-estate tycoon. Contestants would vie for corporate domination with various business-related tasks, and at the end of each episode, Donald would ax the most incompetent person with what would become his infamous catchphrase: "You're fired!" At the end of the season, the winner would be offered a $250,000 contract to manage a business project.

Ivanka started appearing on season five of the show back in 2006 when she was in her mid-twenties, as a regular advisor to her father. She actually ended up collaborating with the season five winner on his business project prize, the Trump So-Ho Hotel Condominium.

From there she graduated to full-on judge in season six of The Apprentice, and later in another iteration of the show, The Celebrity Apprentice. In a promo for season five of The Celebrity Apprentice, famous contestants including Clay Aiken and George Takei can be seen struggling with their task, designing a "living window display" for the Ivanka Trump women's fashion line. "It's a mad scramble to make the boss' daughter happy," the voiceover says.

In a season seven clip following a challenge to create an adoption commercial for Pedigree Dog Food, Ivanka berates contestant Gene Simmons for his "abrasive" attitude. "It was just unnecessary," she says. "I mean you could have almost said nothing."

"Did you insult my daughter?" Donald asks Simmons, leaning across a dramatically lit boardroom table. "Nobody insults my daughter."

According to Ivanka, working on the show was an experience in family bonding. "It’s a less intense version of real life, because I’m on the same side of the table as opposed to the other side of the desk," she said in an interview with Massachusetts news channel WWLP promoting season 14 of The Celebrity Apprentice. "It’s been a great experience and we just love doing this as a family as we do also love working together every day."

It's undeniable that the Trump name has helped the president's oldest daughter launch her career in fashion, real estate, and most recently, in the White House. A line from her appearance in an early 2000s reality show called Born Rich still seems to be relevant today — describing being daughter to a pop culture fixture, Ivanka said "It's not a bad shadow to be under."

Years later, Ivanka is still working with her father — but in a much different setting. Most recently, she helped launch the Trump administration's Women's Global Development and Prosperity Initiative, which she is spearheading.