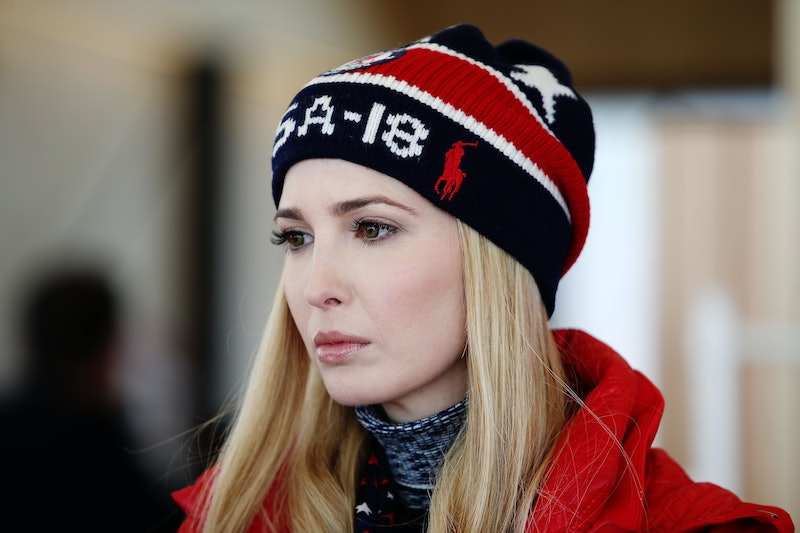 Before Donald Trump became the president, many people assumed that one of the moderating voices in his White House would be that of his eldest daughter, Ivanka Trump. Now, as a senior White House advisor, she does have a role to play in the administration — but she hasn't always made her thoughts known. For example, Ivanka's views on immigration are still not clear, even though immigration is the hottest issue at the moment.

The reason immigration is so at the forefront right now is the recent reports that a Trump administration policy has led to more than 2,000 migrant children being separated from their families at the border in the last six weeks, as the Department of Homeland Security announced. This has drawn heated responses from both sides of the aisle, including a statement from Melania Trump via her spokeswoman that called for "a country that governs with heart." While this statement drew some harsh comments for, as the critics said, how it essentially just rephrased the administration's policy, it was still a rare public statement from a first lady who doesn't seem to enjoy the spotlight.

Now, Melania Trump's statement in particular has some people asking to hear Ivanka Trump's thoughts on this heartbreaking subject. After all, as the writer of a Washington Post opinion piece asserted, the first daughter is the one who has a role as a White House adviser, and the issue in question is a Trump administration policy.

So far, though, Ivanka Trump has almost entirely stayed out of the immigration debate. Back in October, CNN reported on an event in which Trump spoke, where the moderator asked her how she felt about the so-called Dreamers, or recipients of the Deferred Action for Childhood Arrivals program.

"This is a very complicated issue that needs a long-term congressional fix," Trump said. "I personally am of the opinion and the president has stated that we have to figure out a good solution that protects these innocent people, many of whom were brought into this country as children. There has to be a long-term fix and it cannot be bandaged over at a presidential level through another executive order that can be rescinded through another administration."

She also stated that the immigration system was "not equipped to handle the challenges" and that the visa system was "flawed." That one event, though, is the only time that she has been publicly recorded making a statement on immigration.

Trump has, however, commented on policies that are relevant to the outcry over children being separated from their families. In September, she spoke at the U.N. General Assembly about human trafficking and modern-day slavery, denouncing it as something that "splinters families," among other concerns.

"It is hard to grasp how tens of millions of people across the globe can experience this scale of human suffering. It is unacceptable," she said, according to CNN. "Human trafficking, forced labor and modern slavery splinters families, distorts global markets, undermines the rule of law, strengthens transnational organized criminal networks and threatens national security everywhere."

As The Guardian noted, Trump has also been the administration's main source of advocacy for working parents and paid family leave. A Twitter photo of herself with her 2-year-old son went viral for all the wrong reasons recently, because she happened to publish it amid the reports of parents and children being separated. Despite all of this, though, she has remained silent on the policy.

In the past, Trump has explained that her lack of public dissent doesn't always mean that she agrees with her father's policies. This could be the case here — but she would have to speak up to let the world know that.