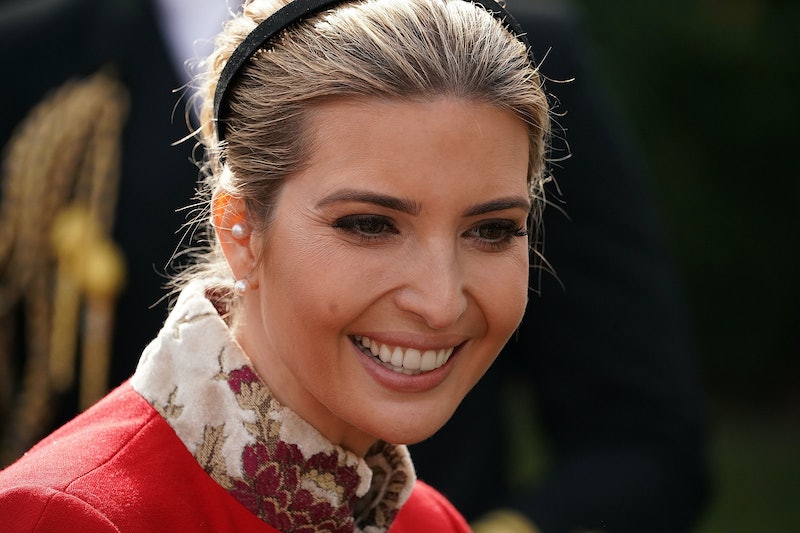 As 2018 picks up speed, one major question looms over Republican lawmakers: What flagship policy change can the party implement that will at help it in November's midterm elections? One proposal gaining traction has to do with instituting and funding paid family leave — and Ivanka Trump and Marco Rubio are reportedly teaming up on it.

According to Politico, the Florida senator and first daughter are collaborating on a paid family leave plan which would be paid for by offsetting whatever an individual has set aside in Social Security retirement funds.

In other words: Instead of increasing taxes or burdening employers with the financial cost associated with paying an employee to take leave, that employee would effectively pay themselves from money they have already saved. In essence, it restructures a pre-existing savings program and allows eligible people to tap into those funds early.

On the flip side: However many saved paychecks you might choose to use to cover the cost of your family leave would be how many paychecks you wait to tap into your Social Security benefits. So, if you used, say, three weeks of pay to cover a short family leave, you would wait three weeks to receive retirement benefits after you leave your job.

The proposal is designed to appeal to Republicans because it is a family-oriented policy that doesn't raise taxes.

Paid family leave has long been a signature talking point for Ivanka Trump, so it makes sense that she is reportedly open to Rubio's idea, which could, in theory, appeal to Republicans and some Democrats.

It's also not unlikely that President Trump would back the plan, if it were to see the light of day. (Rubio told Politico that he's only in the earliest stages of piecing together the plan in bill form.) Several weeks ago, at his first State of the Union (SOTU) address, President Trump emphasized that he is in favor of some type of paid family leave initiative. Specifically, he said:

We can lift our citizens from welfare to work, from dependence to independence, and from poverty to prosperity ... As tax cuts create new jobs, let us invest in workforce development and job training. Let us open great vocational schools so our future workers can learn a craft and realize their full potential. And let us support working families by supporting paid family leave.

While paid family leave is generally supported on either side of the aisle, the plan as it has been described is arguably a lot like... not instituting paid family leave at all. The proposal really prescribes shifting money around in the short-term without providing long-term solutions. At the end of the day, employees would still be paying for their benefits.

According to the United States Department of Labor, only 13 percent of American workers have access to paid family leave benefits. Employers are legally required to offer unpaid family leave, due to the Family and Medical Leave Act passed in 1993. But, a 2012 report conducted for the Department of Labor indicates that only 59% of workers are eligible under the law, largely due to specific stipulations related to company size and hours worked per week. And regardless, paid time off can be, and frequently is, prohibitively unaffordable for the employees themselves.

While congressional Republicans may warm up to Rubio's idea, it's likely going to take the senator (and first daughter/senior adviser) some serious legwork. Paid family leave, while at its core a relatively neutral concept, is generally bolstered by more tax-friendly Democrats. In other words, it might require some serious re-branding.

"We still have to work on members of my own party,” Rubio told Politico. "I think there will be significant initial resistance to it, because it’s just not an issue that’s been identified with the Republican Party."

Rubio also isn't the only Republican lawmaker scrambling to come up with a plan, which means that if he wants to maintain Trump's support, he's going to have to really sell it.