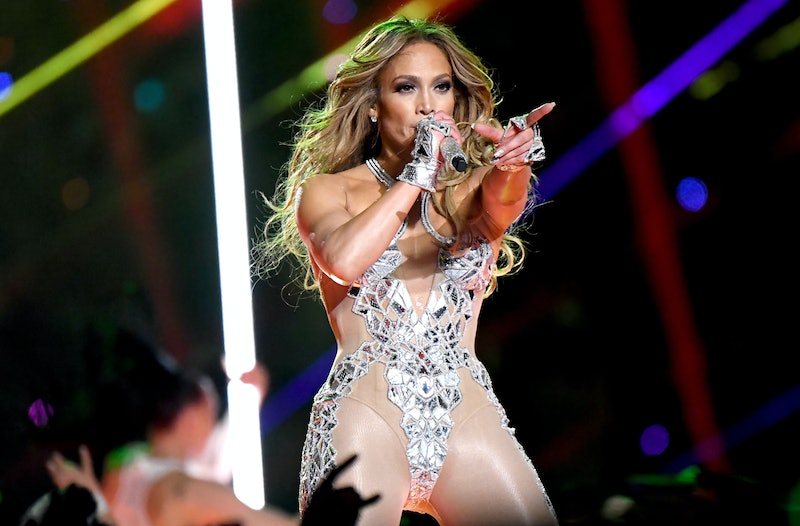 During the Independent Spirit Awards on Saturday, Jennifer Lopez called out critics of her Super Bowl halftime show with Shakira, defending the performance as a "celebration of women and our Latino culture." The response to the halftime show has been overwhelmingly positive, but a small number of commentators found it to be, "too sexy," as per Variety. Lopez dismissed the criticism, saying, "I think that’s honestly silliness."

On Feb. 2, Lopez and Shakira performed at Super Bowl LIV, and it was one of the most dramatic halftime shows in recent history. Between epic choreography, costuming, and a symbolic cover of "Born in the USA" with a children's choir as well as Lopez's daughter, Emme Maribel Muñiz, the performers used one of television's biggest stages to make a major statement.

On Saturday, Lopez hit back at criticism from the small but vocal crowd who found the performance "too sexy," such as one far-right Ohio minister who threatened to sue the NFL and Pepsi over the show, as per Complex. On Twitter, fans dragged the minister for his absurd threat, and Lopez seems similarly unfazed by the criticism.

"Both of us are really respectful performers who are moms and have kids and are very conscious of what we do," Lopez told Variety, referring to Shakira as well. She went on to discuss how the performance was meant to empower young women, stating, "The message of standing up for yourself, being a women — that’s what I want to pass on to little girls — everything about you — be proud of it."

Lopez went on to say she was, "very proud of the performance that night," and that, as for people criticizing the show, they were a "small faction of people who want to be negative about it, that I can’t even let in." The "Jenny from the Block" singer also said that, overall, the opportunity to perform on the Super Bowl stage was, "amazing," and "so many beautiful things," came out of the opportunity to perform for a global audience.

Fans have defended Lopez and Shakira against critics on Twitter, with one Super Bowl viewer tweeting, "The people harping about JLo and Shakira being “too sexy”...really? Can we please stop that tired, antiquated argument?!" Several viewers pointed out the double-standard, as Adam Levine of Maroon 5 performed at Super Bowl LII shirtless, with one user writing, "Adam Levine performed the entire Halftime Show with no shirt on last year, but @JLo and @shakira were 'too sexy.' Ah, yes. The old double standard rearing its ugly head."

During Super Bowl LIV, Lopez and Shakira proved that they are among the most iconic singers of the past decade, and given their immediate boost in record sales, as per Billboard, it seems that the majority of viewers found the performance to be as entertaining and inspiring as the two superstars hoped.