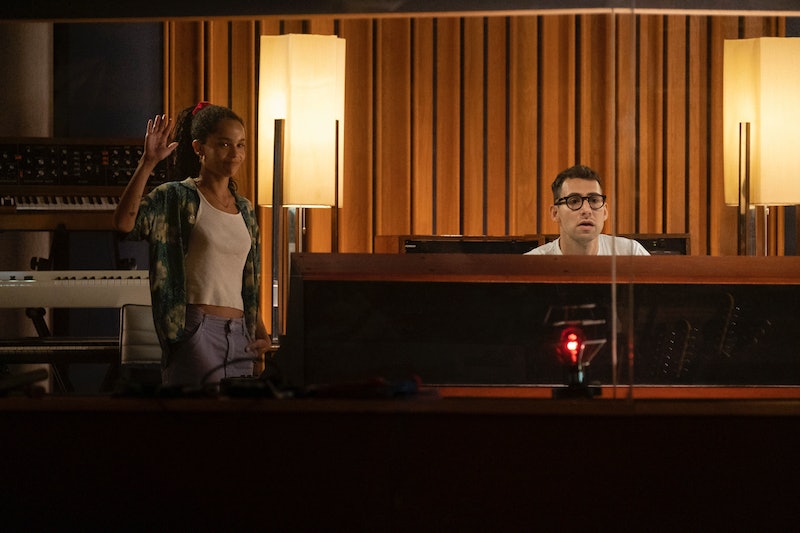 Light spoilers ahead for Episode 6 of High Fidelity Season 1. Jack Antonoff has produced so many hit songs, it almost would have been more surprising if he didn't have a cameo in High Fidelity, Hulu's gender-flipped adaptation of the 2000 John Cusack film. The revamped story makes a few changes — it's set in Brooklyn, not Chicago, and our fourth wall-breaking protagonist Rob is a woman played by Zoë Kravitz — but it's just as music-obsessed as the original movie. Rob still owns a record shop, and she and her friends often run through their Top 5 albums for any and every occasion. Naturally, Antonoff plays himself.

In the sixth episode, Antonoff is producing a track for Liam, a young Scottish singer who happens to be hooking up with Rob. It's actually Rob, not Antonoff, who gives Liam the critical vocal advice he needs to finish the song; Antonoff is too busy checking on their take-out order. When he returns to find the music taken care of, Antonoff is allowed free rein to wax poetic about the brilliance of New York's famous Mamoun's falafel sandwich. "It's like — not my opinion — factually the best falafel," he says, possibly ad-libbing.

Filming this scene apparently isn't the only time Antonoff and Kravitz have found themselves in the studio together. In September of last year, Kravitz, who is the lead singer of the band LOLAWOLF, posted a photo of herself singing on Instagram. It was taken by Antonoff, leading to some speculation that the duo are collaborating. Perhaps that's how he wound up on High Fidelity.

More like this
'Rap Sh!t' Season 2 Is Officially Happening & Will Include "More Seducing & Scheming"
By Brad Witter and Grace Wehniainen
'School Of Rock' Changed Joe Keery's Life Forever
By Alyssa Lapid
The 'Reasonable Doubt' Cast Includes A 'Save The Last Dance' Reunion
By Grace Wehniainen
Devi Is Going To Meet A “Smoldering Bad Boy” In ‘Never Have I Ever’ Season 4
By Jack Irvin and Gabrielle Bondi
Get Even More From Bustle — Sign Up For The Newsletter