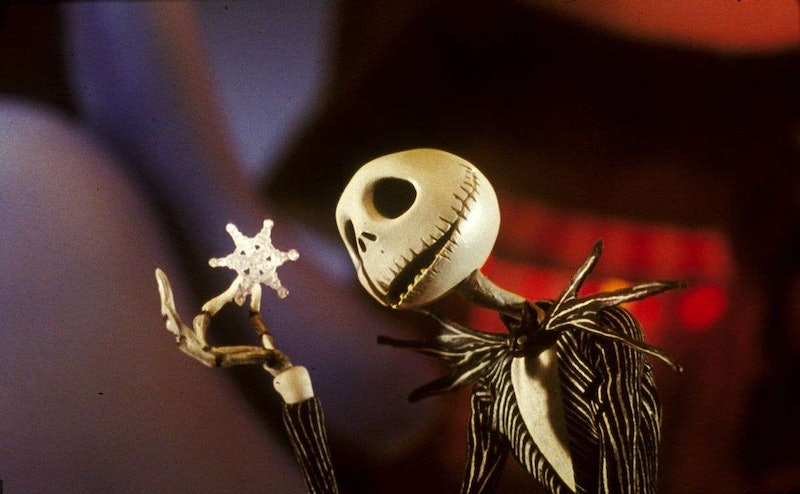 There are so many reasons to love the Tim Burton stop-motion musical The Nightmare Before Christmas. First of all, it's a unicorn of a movie, equally suitable for not one but two holiday seasons. Its whimsical goth aesthetic continues to inspire Etsy shops and new tattoo ideas. And 24 years after its release, it's still one of the most beloved movies in the director's canon. The animation detail is superb; the songs are funny and haunting. But there's one flaw in The Nightmare Before Christmas that I can no longer ignore. It's time to discuss why Jack Skellington is actually a blatantly toxic male character.

I don't know how old the Pumpkin King is supposed to be in this movie. (Time definitely passes in Halloween Town, but do people age? Discuss.) But I do know he appears to be having a mid-life crisis. Basically, Jack gets bored with throwing the town's annual Halloween extravaganza, even though it appears to be the very point of his existence. He's literally referred to as royalty, but the glory is not enough for him. He has to go out looking for something new with no regard to how it will affect the people (and vampires and werewolves) who have known and supported him presumably for his entire life.

Jack finds his new passion in Christmas Town. And does he decide to explore it on his own, just to broaden his horizons? Nope. He decrees that all the citizens of Halloween Town have to drop what they're doing — i.e. the preparations for the holiday that they look forward to all year — just to entertain his whims. He steamrolls everyone, from children to elected officials. And even though Jack has dozens of misconceptions about his fresh holiday obsession, he still mocks his neighbors when they don't get their Christmas tasks exactly right.

You want to talk about Sally? I can talk about Sally. You can't tell me that Jack doesn't have some idea that his rag doll friend is harboring romantic feelings for him. So he takes advantage of her loyalty to support his scheme. When she brings up some constructive criticism, he refuses to hear it. Jack interrupts her to mansplain Christmas to Sally, and then asks her to do the "woman's work" of sewing his costume.

Jack: "Sally, I need your help more than anyone's."

Sally: "You certainly do, Jack. I had the most terrible vision."

Sally: "No, it was about your Christmas. There was smoke and fire..."

Jack: "That not my Christmas. My Christmas is filled with laughter and joy and this: my Sandy Claws outfit. I want you to make it."

Jack's Christmas does end up in smoke and fire, just like Sally predicted. There are tears too. You might think that someone singularly responsible for a disaster that nearly ruined Christmas for all the children of the world and spoiled his hometown's reputation would own up and take responsibility. Not Jack Skellington. Instead, he wails a self-indulgent song about how he put in the old college try and it's actually everyone else's fault for failing to understand him. "What Have I Done?" ends with Jack reclaiming his Pumpkin King title as if nothing had happened. He does bring down Oogie Boogie, but is that cause enough for rolling back into town as if nothing had happened, assuming all his transgressions will be forgotten?

Jack assumes that everything he tries will be as successful as his Halloween Town celebrations and that experience and education aren't necessary. And in the end, it only takes him a few stanzas to absolve himself of his mistakes. The Nightmare Before Christmas is still a charming movie and a fun nostalgia trip. But it's also a cinematic example of a male ego running wild, mowing down everything that's rational in its path.

More like this
22 Movies On Netflix That Are Perfect For The Whole Family
By Bustle Editors
Reese Witherspoon Gave Fans Hope For 'Legally Blonde 3' After This Surprising Movie Inspired Her
By Jake Viswanath
Revisit 1992’s 'A League Of Their Own Cast' Photos After The New TV Series
By Grace Wehniainen
At 28, Lesley Manville Was Acting, Picketing, & Singing Kate Bush Songs
By Olivia-Anne Cleary
Get Even More From Bustle — Sign Up For The Newsletter