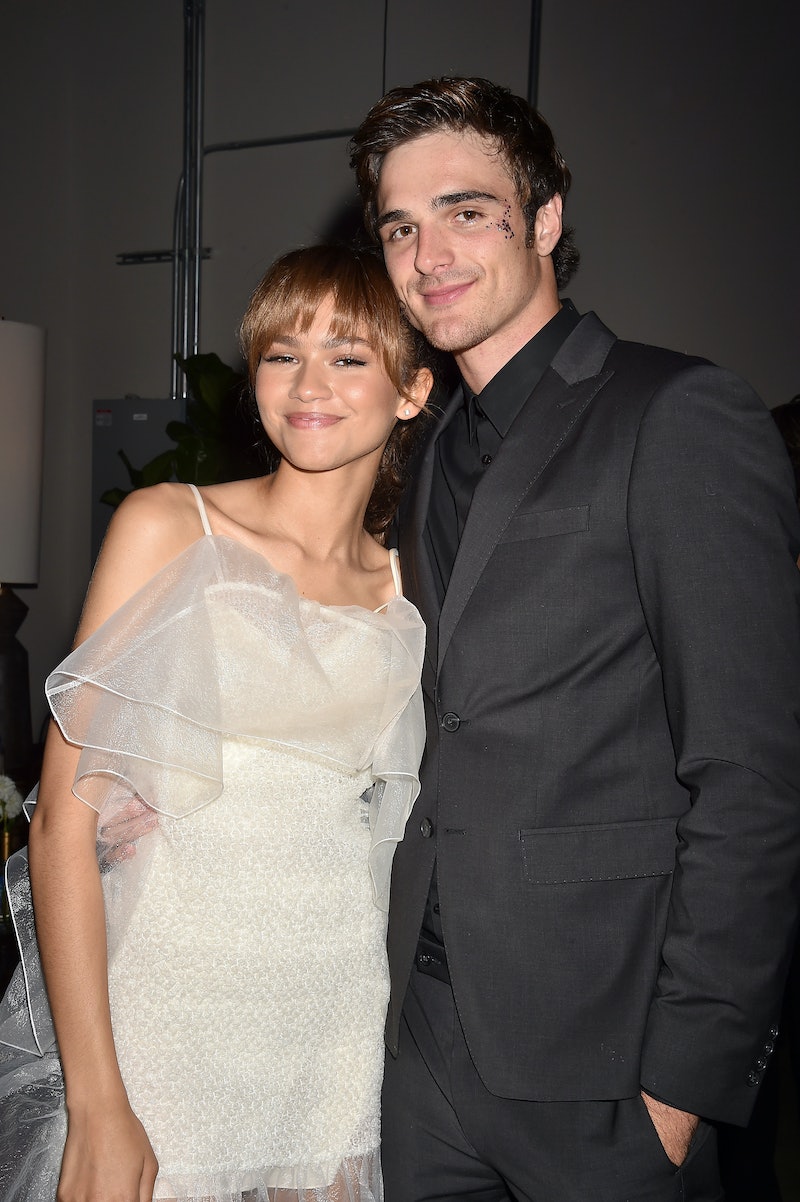 On Euphoria, Zendaya stars as Rue, a 17-year old struggling with drug addiction, and Jacob Elordi plays Nate, an antagonist jock. But while their characters on Euphoria may be enemies, in real life, Jacob Elordi and Zendaya are so close, he recently said that she's "like my sister." Sharing his appreciation for his costar in an interview with GQ Australia, Elordi seemed to dismiss rumors that he and Zendaya are dating.

Euphoria, which is based on creator Sam Levinson's on experiences with mental illness and substance abuse, deals with heavy content. During the interview, Elordi spoke highly of Zendaya's talent on set, saying, "Zendaya is an amazing creative, you know? She’s super dope to work with. She's an incredible artist and a very caring person to all of us." Elordi was sure to note that the rest of the cast bonded as well, adding, "We're all really close. There is not one weak link in that show." He added, "We've spent so much time together and everyone is just so cool to work with."

In August, Elordi and Zendaya sparked romance rumors during a vacation in Greece, where the two were spotted sight-seeing at the Acropolis in Athens, according to E! News. (Bustle reached out to representatives for both actors at the time, but did not receive a response.) In November, Zendaya and Elordi were spotted in Sydney, Australia, while both in town for the GQ Men of the Year Awards, according to Elle. And the rumors put the actor's comments about Zendaya being like a sister in a slightly different light, suggesting that, despite how close they are, the two co-stars are just friends.

Zendaya and Elordi may or may not be dating in real life, but onscreen, the actors have a different kind of chemistry. In Season 1, they were mostly at odds with each other, and in June, Elordi teased Rue and Nate's future plot lines an interview with The Hollywood Reporter, saying, "It's kind of like this protagonist-antagonist thing." He added, "There's like this slow-burning tension I suppose between the two of them." The actor could have been hinting at potential romantic tension, but considering where Season 1 left off, Rue and Nate probably won't be hooking up anytime soon.

More like this
RHOP’s Robyn Dixon Explained Why Juan Paid For Another Woman's Hotel Room
By Brad Witter
Vanessa Bauer Is Reportedly Dating Her 'Dancing On Ice' Partner
By Darshita Goyal
Here’s What Happens To Bill & Frank In 'The Last Of Us' Video Game
By Brad Witter
Who Is Allison Williams Dating After Her Divorce? She’s Engaged With A Child
By Jake Viswanath
Get Even More From Bustle — Sign Up For The Newsletter
From hair trends to relationship advice, our daily newsletter has everything you need to sound like a person who’s on TikTok, even if you aren’t.