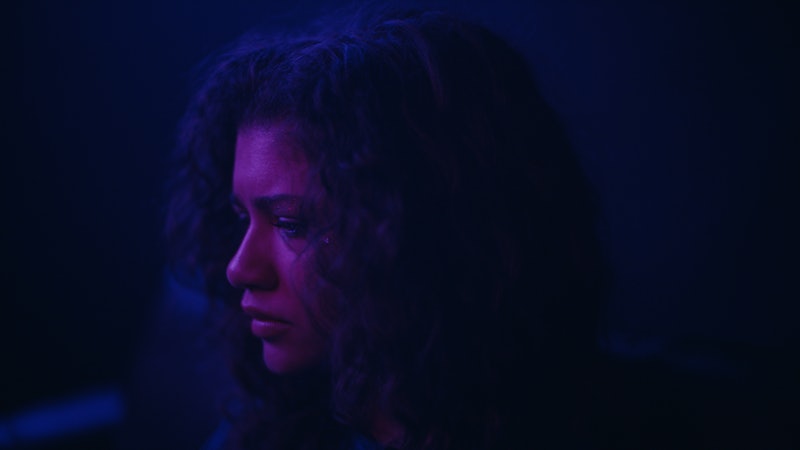 Spoilers ahead for the Euphoria Season 1 finale. While the majority of the Euphoria Season 1 finale provided some semblance of closure for characters like Kat and Cassie and left some intriguing threads dangling around characters like Nate and Fez, the HBO drama saved its biggest WTF moment for the very end. After suggesting to Jules that they should leave town, Rue found herself unable to follow through on her impulsive idea — so Jules left without her. A distraught Rue returned home, seemingly relapsed… and broke out into song and dance alongside a gospel choir and marching band? What does it all mean??

As the bizarre sequence drew to a close, Rue climbed to the top of a pile of bodies, stood there for a moment, and then dove off the edge and out of sight. The last image of the season was a bright light shining into the empty space where Rue had been moments before. This haunting final shot will likely only add fuel to the flames of the fan theory that Rue is dead and has been narrating the entire show from the grave — which, in many ways, makes sense.

Rue's narration has always been in the past tense, and she seems to know far more about her fellow high schoolers and their lives than if she were a normal, living teenager. Could viewers have just seen the event that ends Rue's life, revealing that yes, she's been omnisciently narrating the whole show from the afterlife?

To many, the symbolism of the ending will undoubtedly confirm this theory: the dreamlike sequence, the jump off the cliff, the white light. Euphoria has always tried to mimic what its characters are feeling with its camerawork and visuals, and this could be creator Sam Levinson's way of giving shape to an experience as unknowable as dying.

There's also the bookend scenes of Rue's mother reading a letter about Rue in church. Doesn't that feel like the kind of letter you'd read at someone's funeral? And notice that Rue and her sister are never seen together during that sequence; they're both shown sitting in the pews by themselves, Gia listening attentively while Rue sulks quietly in the back by herself. Is she watching her own funeral from beyond the grave?

But if this is the show killing off Rue, it's got to be the most esoteric way a television series has ever killed off its main protagonist. This isn't the sword going through Ned Stark's neck; this is much more vague in its intent and execution. Would a show really kill off its lead without making sure the audience knew that's what it was doing? It would be quite a shock to fans who didn't pick up on this if, when Season 2 returns, it's confirmed Zendaya's character is dead. (It's also a rather bleak ending for a character that creator Sam Levinson has said is at least semi-autobiographical in nature.)

And what might the show look like in Season 2 if its main character has really died? Zendaya is almost certainly returning for the drama's sophomore season, but will she merely be a haunting presence who continues to narrate her friends' lives from her incorporeal realm? If so, that would be a major bummer; Zendaya has turned in Emmy-worthy work in Season 1, and it's hard to imagine the actor's talents being well-served by being relegated to ghostly tour guide.

It's possible that this interpretation is reading too much into the sequence, and that it was merely representative of Rue's relapse and that she'll return in Season 2, still misusing drugs, but very much alive. However, it's hard not to imagine that Levinson at least wants his viewers to think that Rue is dead, and give us something to agonize over for the next year or so while we wait for answers.

More like this
Everything To Know About 'Only Murders In The Building' Season 3
By Gretchen Smail and Kadin Burnett
The Song At The End Of 'The Last Of Us' Ep 1 Has A Deeper Meaning
By Sophie McEvoy
The 'New Amsterdam' Series Finale Opens An “Unexpected” Door To The Future
By Brad Witter
Shonda Rhimes Responded To The Surprise Exit Of A Day 1 'Grey's Anatomy' Figure
By Grace Wehniainen
Get Even More From Bustle — Sign Up For The Newsletter
From hair trends to relationship advice, our daily newsletter has everything you need to sound like a person who’s on TikTok, even if you aren’t.