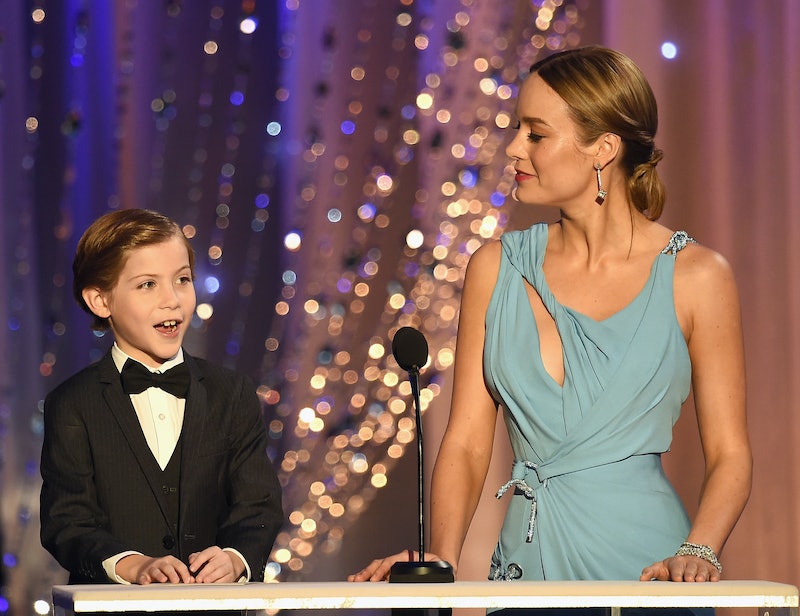 An age difference doesn't matter when it comes to being best buds. Jacob Tremblay's support of Brie Larson's Captain Marvel success proves that the two share such an enduring, special bond. The actors worked together in 2015's award-winning drama Room, playing a closely-bonded mother and son duo in a moving survival story. Although they haven't worked together since, it clearly doesn't take a movie set for these guys to remain close and cheer one another on.

On Saturday, Mar. 9, the day after the highly-anticipated Captain Marvel premiere, 12-year-old Tremblay tweeted showers of praise for Larson, her work, and hard-earned success. "I just saw #CaptainMarvel's smile & so much more! Her humor, wit, brains, strength, power & heart!" he wrote. "Congratulations my friend @BrieLarson I am so proud of you!" And to leave fans with even more sweetness, he ended the tweet with: "#SheIsMySuperhero."

Their love and rapport hasn't changed a bit. Larson responded to the tweet, writing, "Love you coworker." Tremblay responded posting a photo of the two toasting with wine and a milkshake, writing, "A toast to you!"

Captain Marvel, and Larson's leading role in it, clearly means so much to Tremblay and to fans around the world. On Sunday, The Hollywood Reporter claimed the Marvel film "shattered the glass ceiling" earning a whopping $455 million in global box office sales the first weekend. This made Captain Marvel the biggest worldwide premiere of a female-led movie in history. Tremblay, having a personal connection with Larson, has so many reasons to look up to the 29-year-old actor the way he does.

In 2016, Larson was just 26 when she scored the Academy Award, Golden Globe, SAG, and Critics' Choice Awards for Best Actress in a Motion Picture for her gut-wrenching performance in Room. (Tremblay also won Critics' Choice Movie Award for Best Young Performer that year.) The 2015 drama is a survival story about a woman and her young son held captive in an enclosed, underground space for seven years. The film, based on the 2010 best-selling novel by Emma Donoghue, follows the duo's journey to freedom after Ma (Larson) is kidnapped as a teenager and births son Jack (Tremblay) in captivity, fighting for him to experience the outside world for the first time.

When Room was released, Larson was 26 and Tremblay was only 9. At the time, the two talked about how they formed such a solid bond in the process of making the film. "'What's your favorite color? What's your favorite animal? And do you like Star Wars?'" Larson recalled Tremblay asking her when they first met, in a Nov. 2015 interview with Vanity Fair. "And that was the beginning of it," she said. "There was a little Star Wars figurine, and that's how I knew we were going to get along."

She continued, telling Tremblay, "You're really fun to play with, you're really good at Legos... You're my best friend and I was sad to say goodbye. I think we had a lot of fun." A young Tremblay added, "And now we're best friends." All it takes is some Legos, Star Wars talk, and a mutual love of a person's craft for a friendship to be indestructible.